Coming up in April JAKE SHIMABUKURO speaks with Janeane about his latest NEW release studio album! 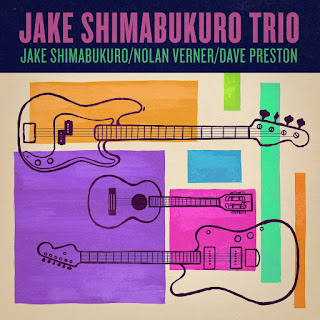 
“Jake is taking the instrument to a place that I can’t see anyone else catching up with” Eddie Vedder
“Gorgeous” Rolling Stone
“The Jimi Hendrix of the Ukulele” BBC Breakfast
“There's an unexpected sophistication that defies the instrument's perceived limitations.” CNN

Jake Shimabukuro has been redefining what the ukulele is capable of for the last 20 years, and on 14 February 2020, he returns with his new album ‘Trio,’ his first on Music Theories Recordings, a division of Mascot Label Group. Ahead of this they reveal a stunning reworking of Pink Floyd’s ‘Wish You Were Here.’

“People call me ‘an ambassador for the ukulele,’ but I really don’t see myself that way,” Shimabukuro says. “I’m simply a fan of the instrument. Ever since I was a kid, I just loved playing it, and over time, I started to realize that you could do more than just play traditional songs on it. You can play heavy metal riffs and make different sounds. You can make it rock like an electric guitar. There’s no end to what you can do on the ukulele, and it’s been rewarding for me to show that to people all over the world. I still love and respect traditional music, but I also enjoy exploring other sounds on the instrument.”

Re-imaging beloved classics has become a Shimabukuro specialty, and to celebrate the announcement of the new album, he and the band have their own unique way with Pink Floyd’s “Wish You Were Here.” The suggestion to record the song came from Shimabukuro’s longtime manager, Van Fletcher, a dedicated Floyd fan who had given the ukulele titan the album of the same name years ago and pressed him to listen to it – which he did. Acting on such inspiration, the three musicians turn in a glorious reading – the blend of Preston’s rustic guitar lines, Verner’s richly intuitive bass playing along with Shimabukuro’s ravishing treatment of melodies is one of the album’s standout moments.

For the past five years, bassist Nolan Verner has been a constant presence on stage and in the studio with Shimabukuro, and two years ago, guitarist Dave Preston joined the fold. The three clicked so well on the road and during the recording of Shimabukuro’s 2018 album, ‘The Greatest Day,’ that the ukulele master decided to document their sonic alchemy in a more official way on his newest album, ‘Trio.’ Unlike previous releases that sometimes featured studio musicians, this would be a true band album, with the only sounds performed by Shimabukuro, Verner and Preston, and many of the songs would be written spontaneously in the studio. In this way, ‘Trio’ marks a bold and exciting new era in Shimabukuro’s already remarkable career.

It was nearly 15 years ago that the world first caught notice of the stunning musical artistry of Jake Shimabukuro. The young ukulele player’s gorgeous rendition of George Harrison’s ballad ‘While My Guitar Gently Weeps’ whilst sat in Central Park, became one of the most-watched clips on the then newly launched YouTube platform, and now sits at 16.5m+ views.

Born in Honolulu, the capital of Hawaii, the 4 year old was drawn to the sound of the Ukulele (pronounced “OOO-koo-le-le,” meaning ‘jumping flea’) and picked up his mother’s Kamaka. Whilst still young his parents divorced, although still on good terms with each other, his mother would work multiple jobs, sometimes until early hours of the morning, providing for Jake and his younger brother Bruce, having dinner waiting for them for then when they got home from school. It was during this time his fascination with the instrument heightened and he began lessons at the Roy Sakuma Ukulele Studios, Hawaii’s premiere teacher.

As he progressed, he began to push the boundaries of what the instrument was capable of. “I’ve always had this vision as a kid, I would watch rock bands, like Van Halen and guitar players like Yngwie Malmsteen and you’d see these guys running all across the stage, jumping into the audience, stage-diving and yelling and screaming,” he says. “I always thought to myself, why can’t a ukulele concert be like that?”

He released 3 albums as part of the band Pure Heart, and has since released 16 solo albums beginning with 2002’s ‘Sunday Morning’ up to 2018’s ‘Greatest Day’ – 6 of these albums reached the Billboard Top 5 World Album Charts, including the #1 ‘Peace Love Ukulele’ (2011). Alan Parsons personally asked to produce his 2012 album ‘Grand Ukulele’ – Parsons’ credits (as a sound engineer) include Pink Floyd’s ‘Dark Side of the Moon’ and The Beatles ‘Abbey Road’ and ‘Let It Be.’ Jake has been lauded by Pearl Jam’s Eddie Vedder who said, “Jake is taking the instrument to a place that I can’t see anyone else catching up with.”

He started to experiment with effect pedals and transforms the tiny instrument into a million different musical forms, dexterously playing jazz, rock, classical, traditional Hawaiian music, as well as folk. It is this that has led him to collaborate with a number of incredible musicians such as Warren Haynes, Tommy Emmanuel, Jimmy Buffett (who also took him on tour for 3 years and appears on a number of albums), Jack Johnson, Cyndi Lauper, Ziggy Marley as well as renowned shredders like Paul Gilbert and Marty Friedman. Add to this the time he performed at the 2009 Royal Variety Performance with Bette Midler in front of Queen Elizabeth II, even meeting Her Majesty after the performance.

A tireless live performer, he’s floored audiences across the globe, appearing at music festivals as varied as Bonnaroo and the Fuji Rock Festival. He’s played with world-renowned orchestras at prestigious venues from the Hollywood Bowl to the Sydney Opera House. As well as his original material you can see his dexterity when he is able to take on versions of an array of other artists from Daft Punk to The Beatles, Queen to Leonard Cohen, Michael Jackson to Adele and Nirvana amongst others. “When you see someone come out with a ukulele, you don’t expect a lot of music to come out of that instrument. Especially when there’s no singing involved. You don’t expect to hear a lot of melody, or pop or rock tunes,” he explains.

The “Jimi Hendrix of the Ukulele” has gone on to appear on some of the biggest national TV shows in the world including Late Night with Conan O’Brien, Jimmy Kimmel Live, Carson Daly, The Today Show and BBC Breakfast. There has also been a documentary made on him, entitled ‘Life On Four Strings,’ and he has dedicated many years to non-profit charity organizations to create outreach programs and educational workshops to schools.

Early 2019, Shimabukuro, Verner and Preston holed up in Nashville’s Sound Emporium studio with only a few snippets of riffs and melodies fleshed out, and over the course of a week jams took flight and became songs. Guiding the process was producer R.S. Field (Steve Earle, Webb Wilder, John Mayall, Sonny Landreth). “Fearless” aptly describes how they created ‘When the Masks Come Down,’ the opening track on ‘Trio.’ A beguiling mix of ambient, Edge-like patterns, incandescent melodies and mammoth hard-rock crunch, it unfolded like magic during a studio jam. ‘Twelve’ is a bewitching metaphysical mood piece. Shimabukuro based its structure on Set Theory, a branch of mathematics that also corresponds to the 12 tones of the Western music scale. Shimabukuro has always loved the traditional Hawaiian song ‘Wai’alae,’ and he has fond memories of performing it with fellow islanders the Side Order Band on his first tour of Japan some 25 years ago.

The three musicians spread the waters of pastoral folk on the heavenly ‘On the Wing’ whilst the title of ‘Strong in the Broken Places’ comes from a line in an Ernest Hemingway quote. The album could have ended there and been considered a triumph, but Shimabukuro, Verner and Preston conclude Trio with an incandescent version of Fleetwood Mac’s ‘Landslide’ that features a sparkling vocal performance by Rachel James (from Denver-based folk-rock band Dearling.)

It’s fitting that 21 years after his first release, Shimabukuro is continuing to push boundaries on both the instrument and himself. What would the 4 year old Jake make of the adult Jake now in 2020, from trying to master those first three chords to playing in front of Queen Elizabeth II, touring the world playing some of the not only most iconic venues, but iconic landmarks. He brings a new way to approach an instrument with only four strings and two octaves that has inspired others to pick up the ukulele worldwide. ‘Trio’ marks another chapter in his remarkable story so far and feels as fresh and inventive as his earliest releases.

2020 will prove to be another landmark year for Shimabukuro, with a second special release to follow later in the year, where he collaborates with a number of high-profile guests. ‘Jake & Friends’ will feature artists such as Lyle Lovett, Bette Midler, Jack Johnson, Jon Anderson (Yes), Warren Haynes (The Allman Brothers Band, Gov’t Mule), Moon Taxi, Ray Benson (Asleep At The Wheel) and Michael McDonald (The Doobie Brothers) amongst others. More details to follow.