Coming soon! From journalist Kayleen Schaefer, author of the highly acclaimed Text Me When You Get Home, comes a timely and essential book on thirtysomethings today, a generation redefining what it is to be an adult— and how the best for them is both yet to come and already here 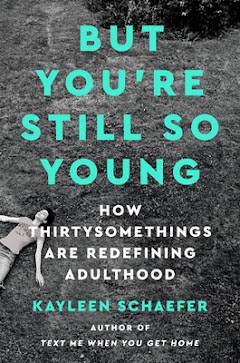 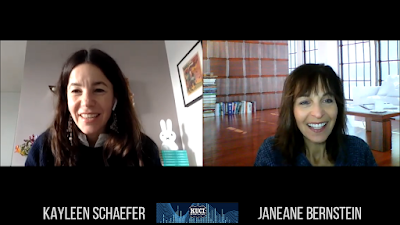 LISTEN | WATCH
VOGUE “Best of 2021” | BuzzFeed “Most Anticipated 2021” | The Week “23 Must Reads in 2021”
ABOUT
From the author of Text Me When You Get Home, a look at what it means to be in your thirties, and to navigate some of the biggest milestones of adult life . . . and how it is more okay than ever to not have every box checked off.

On Kayleen Schaefer’s birthday she went dancing with friends, they broke a table, and she turned thirty standing on the sidewalk outside a club she got kicked out of.

Sociologists have identified the five markers of adulthood as: finishing school, leaving home, marriage, gaining financial independence, and having kids. But the signifiers of being in our thirties today are not the same—repeated economic upheaval, rising debt, decreasing marriage rates, fertility treatments, and a more open-minded society have all led to a shifting timeline. Americans are taking major life steps later, switching careers with unprecedented frequency, and exercising increased freedom and creativity in their decisions about how to shape their lives. So why are we measuring "adulthood" by the same metrics that were relied upon fifty years ago?

BUT YOU'RE STILL SO YOUNG is cleverly structured around these five major life events. For each milestone, the book highlights men and women from various backgrounds, from around the country, and delves into their experiences navigating an ever-changing financial landscape and evolving societal expectations. The eight thirtysomethings in this book envisioned their thirties differently than how they are actually living them. He thought he would be done with his degree, she thought she’d be married, they thought they’d be famous comedians, and everyone thought they would have more money.

Kayleen uses her smart narrative framing, her relatable voice, and her own story to show how the thirties have changed from the cultural stereotypes around them, and how they are a radically different experience for Americans now than it was for any other generation. And as she and her sources show, not being able to do everything isn’t a sign of a life gone wrong. Being open to going sideways or upside down or backward, means it has gone right: you found meaning and value in many different ways of living.


BUT YOU’RE STILL SO YOUNG: How Thirtysomethings Are Redefining Adulthood is cleverly structured around the five major life events: “Completing School,” “Leaving Home,” “Marrying,” “Becoming Financially Independent,” and “Having a Child.” Schaefer shares findings from data research and hundreds of interviews conducted nationwide. For more than a year (including during the COVID-19 pandemic), Schaefer closely followed eight subjects —gay, straight, white, POC, single, coupled, parents and childfree—whom readers will meet up close. The result is an intimate and fascinating glimpse of a generation.

Some of the findings in BUT YOU’RE STILL SO YOUNG:


● For this generation, living with one’s parents became the most common living arrangement for Americans ages eighteen to thirty-four, overtaking living with a romantic partner. The pandemic has exacerbated this: One survey estimated that 2.9 million adults moved in with a parent or grandparent in the spring of 2020

● A large body of research shows that young adults are most harmed by recessions, and for those in their thirties who started their careers during the aftermath of the 2008 recession, the economic destruction caused by the coronavirus pandemic is another blow in barely a decade. An analysis by the McKinsey Global Institute noted that this age group is “now going through its second ‘once-in-a-lifetime’ downturn”

● In 2018, the average age of first marriage in the U.S.—thirty for men, twenty-eight for women—is the highest it’s ever been. Only half of U.S. adults are married, compared to 72% in 1960. In a recent Census survey, more than half said that getting married wasn’t an important part of becoming an adult

● More than half of Americans 21-37 (mostly white and college educated) received some sort of financial assistance from a parent, guardian, or family member since turning twenty-one. This includes money for cell phone bills (41%), rent (40%), groceries and gas (32%), or health insurance (32%)

● In 2019, the birth rate in the United States fell for a fifth straight year and reached the lowest it’s been in thirty-five years. Demographers say that the quarantine orders during the coronavirus pandemic won’t cause the birth rate to jump either

● According to estimates, forty-five million people in the United States have school debt, and the total is about $1.5 trillion, which is more than Americans owe on their credit cards or car loans.

Schaefer uses her own story to show how the thirties have changed from the cultural stereotypes around them, and how they are a radically different experience for Americans now than it was for any other generation. For today’s Millennial thirtysomethings, Gen Z-ers curious about adult life ahead of them, and older cohorts seeking to understand why things are different for their children, BUT YOU’RE STILL SO YOUNG illuminates this life-defining, challenging and often rewarding period of life.

Kayleen Schaefer is a journalist and author of Text Me When You Get Home, which was widely praised as “witty,” “timely, nimble, essential” and more, by outlets such as ELLE, The Washington Post, New York Times, Bustle, NPR, Buzzfeed and many others. She also wrote the bestselling Kindle Single memoir Fade Out. Her work has appeared in The New York Times, Vanity Fair, The New Yorker, Vogue, and many other publications. She lives in New York City. Follow her on Twitter @kayleener or Instagram @iknowkayleen.