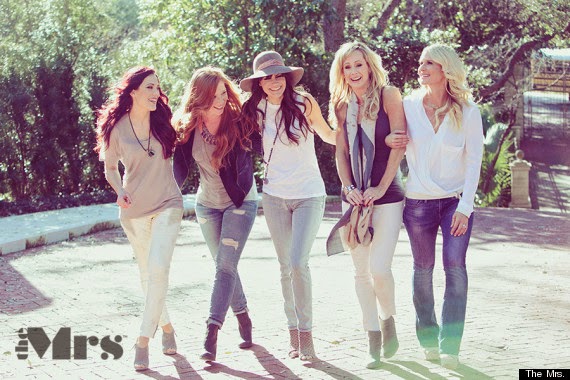 Amid tales of teenage heartbreak and gone-wild nights at the club, where’s the music for women like us? We weren’t hearing our lives reflected on the radio, so we decided to sing it ourselves.Can’t find what you need? Contact info@themrs.com.

Walter Dominguez and his wife, Executive Producer Shelley Morrison, chatted with host Janeane Bernstein about their powerful film, Weaving the Past - Journey of Discovery 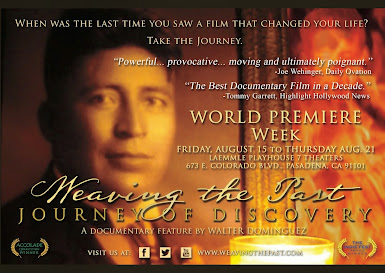 Walter Dominguez and his wife, executive producer Shelley Morrison joined me this morning to discuss their film Weaving the Past: Journey of Discovery, and the thirteen-year journey to complete it and bring it to the public.

If you missed Walter and Shelley, listen here.

The premiere is Friday, August 15. It runs until Thurs Aug 21- a one-week exclusive engagement in Pasadena at the Laemmle Playhouse 7 theaters.

Filmmakers Walter Dominguez and his wife Executive Producer Shelley Morrison (an actress known for her role as Rosario on the long-running sitcom “Will and Grace”) discuss their documentary “Weaving the Past:  Journey of Discovery.” The film had its world premiere on Friday, August 15 at 7:00 PM at the Laemmle Playhouse 7 theater complex in Pasadena’s historic Playhouse District. The exclusive engagement runs through Thursday August 21st. Screenings are daily at: 1, 4, 7 and 10pm.

As a young man, Dominguez was inspired by his grandfather, Emilio, known as “Tata,” who was one of the most prominent and beloved Mexican Methodist ministers in idyllic Santa Paula in rural Southern California.

Walter Dominguez spent eleven years to uncover Tata’s past, through the border town of El Paso, to the rural mountains of turn-of-the-century Mexico.

Weaving The Past: Journey of Discovery

Rip Ribble, an icon at the Santa Ana Zoo, joined me today at 9am pst! 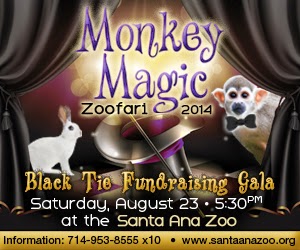 Rip Ribble, an icon at the Santa Ana Zoo, joined me today at 9am pst! And we also chatted about Zoofari 2014 – Monkey Magic! coming up August 23 --- their 22nd annual black tie fundraising gala, Zoofari 2014, “Monkey Magic!”

If you missed Rip on today's show, you can listen to our conversation here!


The Zoo's Entertainment Stage, entitled the "Rip Ribble Education Station" was named after him.

Worked 4 years as a "Skipper" on Disneyland's Jungle Cruise. Rip resides with wife Karen in Yorba Linda, has two grown children. He is a graduate of Orange Coast & Cal State Fullerton & honorably served 4 years in the Marine Corps.

Here's a feature on Rip:
http://www.ocregister.com/articles/zoo-314599-rip-president.html

The evening includes valet parking underwritten by the Tudor House, a fully-hosted bar, hors d’oeuvres, entertainment, “50 Monkeys Jumping On The Bed” signature drink, photo opportunity, Magician and Monkey-themed decorations by R.W.B. Party Props, and live and silent auctions. Ed Arnold returns as our honored host for the evening, while Glen Fladeboe, our preeminent fundraising auctioneer, will serve as the master of ceremonies again for the live auction, followed by a fully-catered sit-down dinner by Parties by Panache and dancing into the night.

The Friends of Santa Ana Zoo Board President David Exline says “Join Zoofari Event Manager Cathi Decker and myself for the best-ever Zoofari Fundraising Gala. Bid on wonderful trips, beautiful baskets, and one-of-a-kind gifts in our live and silent auctions, as well as enjoy an evening under the stars with a delectable catered dinner, drinks, music, and dancing!”

This year, Zoofari is raising money to help the monkeys at the Zoo as well as numerous other Zoo improvements. Your support of Zoofari will help make the Zoo a fabulous place for the young and young at heart!

www.santaanazoo.org
Posted by Get the Funk Out! at 8:15 AM

Martin Gerschwitz joined me Monday on Get the FUNK Out! 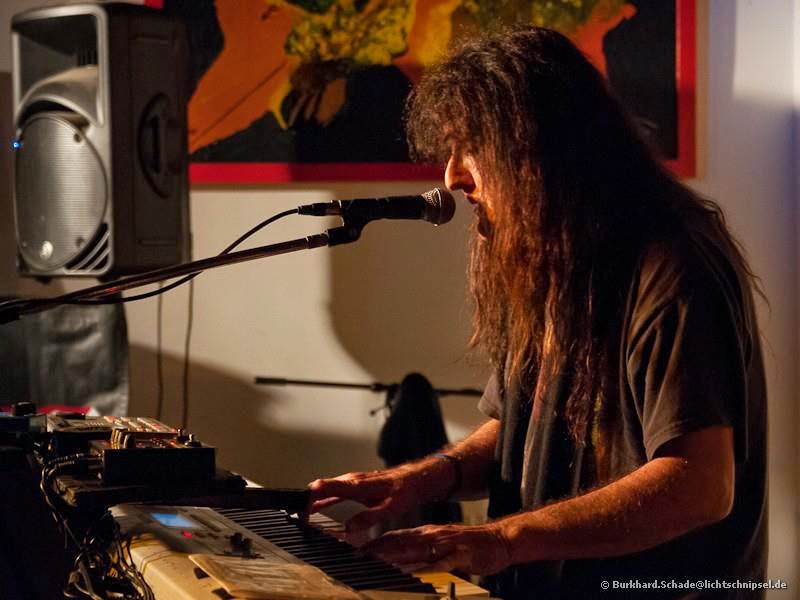 If you missed Martin on today's show,
listen to our conversation here.

ABOUT MARTIN
Martin Gerschwitz's formula for success is a fine blend of luck, a whole lot of struggle, and a strong belief that some day he'll be at the top. That day is just around the corner for Martin Gerschwitz, the classically trained German born keyboardmaster.

At the age of 16, he already played with big german orchestras, of course all classical music! Then in 1968, his older brother (who is a very successful Cello - player) gave him a record to listen to ("Five Bridges Suite" by The NICE, Keith Emersons first band), and Martin discovered Rock’n’Roll. Within 3 weeks, he put his first band together ("THE AVENGERS").....

After several years playing on the german scene with german bands, backing up famous german singers and being among other things the keyboard player for “PERCY SLEDGE” ("When a man loves a woman") for a whole european tour, he finally in 1978 formed his own american-style Rockband "BREAKPOINT" (they recorded one album in 1981 called "First Serving", and in 2006 it got re-released as a CD in the USA by “Regeneration Records”), which toured very successfully all over the american Military Circuit in Europe. But that wasn't enough for Martin, he wanted to make it worldwide - so he gave up everything he had, sold his equipment very cheap, paid off his debts and went on his way to the USA!

So here he was - in 1985 - in the United States - without money, a band or equipment.....
For the first 2 months Martin worked for a messenger service to make some money to buy equipment again, and it didn't take long for him to put his aforementioned formula to work. After one audition “TIM BOGERT” (ex - “Vanilla Fudge” bass player) asked him to join his band, and by the end of the year Martin Gerschwitz added “LOVERBOY” and EDDIE VAN HALEN to the list of musicians which he's shared center stage with.

Over the next 28 years Martin performed at well over 12.000 live events worldwide, from solo appearances with orchestras in Germany to European Rockfestivals, from the Russian Rhythm and Blues Festival to the Singapore Blues Festival, from a concert tour of the Persian Gulf countries to the Iceland Rock Festival, Martin Gerschwitz toured the U.S. and the world with such acts as “LITA FORD” (1987 - 1989), “MEAT LOAF” (1989 - 1990), “VANILLA FUDGE” (1991), “WALTER TROUT BAND” (1993 - 1998), just to name a few. He also recorded many CD's as a result of these tours.

In 1996 he also started his own project utilizing the classical knowledge he had, and as a result of that, Martin put out 2 more CD's, "Lazy Afternoon" (1999) and "Nobody knows me" (2000) - wonderful, relaxing all keyboard pieces of music, and both are available through his website (www.martingerschwitz.com), too - a must have for every music fan!

In March of 1999, Martin got approached to join “Eric Burdon & The Animals” as their permanent keyboard/violin player. Martin toured with them all over Europe, North America, Hongkong, Singapore, Australia, New Zealand, etc., actually - the band was touring constantly all over the world with more than 140 shows per year!
In the midst of all this touring, the band (with Martin) made time to record 3 Live CD's, "Eric Burdon & The New Animals - Bootleg 2000" (which was recorded at "Stephen Talkhouse" in Amagansett, NY), in 2002 "Eric Burdon & The New Animals - Live in Seattle" (which was recorded at the "Experience Music Project" in Seattle, WA), and in December of 2004 “Athens Traffic Live” (which was recorded in - you guessed it - Athens/Greece)!

Once again - everything aforementioned (CD’s/DVD’s) is available through Martin’s website (www.martingerschwitz.com)!

As of November of 2005, Martin is a proud member of “Iron Butterfly” – in fact, he’s their keyboard player/lead singer - and maybe at some point the violin will be part of the show again, too…..???

In May of 2007, Martin released a remastered re-issue double CD of 2 of his most successful earlier CD’s (“Lazy Afternoon” and “Nobody knows me”, both of those are sold out), it’s called “Somebody should know me by now”… and in September of 2008 yet another masterpiece, “Bridge to Eternity”, feat. for the first time his european touring band “Martin Gerschwitz & friends” !!!

Finally – in September of 2011, Martin released 2 more instrumental CD's (“I only look loud”, and “Martino's Christmas Music”) ... again, a must have for everybody, and most certainly for music lovers !!!

Ever since 2008, Martin has been and still is touring extensively as a solo-act all over Germany, Slovakia, Czech Republic, and Belgium … and as of 2011, he finally started touring in the US as well, several times in Oregon, Washington state, Nevada, Arizona, and also all over California …

Try to catch him at one of his performances, you're definitely in for a treat !!!