Filmmaker Alex R. Johnson joins me Monday at 9:00am pst to talk about his film "Two Step."

"Two Step" -- a gritty, slow-burn Austin, TX set indie thriller! I will be chatting with filmmaker Alex R. Johnson Monday at 9:00am pst.  It's the feature debut of this Austin based filmmaker, got a lot of love at SXSW last year, and features a cool cast of fresh-faced as well as veteran character actors all doing terrific work.
Here is the trailer:   http://www.traverse-media.com/two-step.htmlIt will be released in NY on July 31, followed by LA on August 7.
FOR IMMEDIATE RELEASE
SLOW BURN TEXAS THRILLER AND FESTIVAL FAVORITE, ‘TWO STEP’ TO BE RELEASED THIS SUMMER.
'Deeply human and quietly unsettling' – THE PLAYLIST
LOS ANGELES —Director Alex R. Johnson's award-winning thriller TWO STEP begins its limited theatrical release in New York City and Los Angeles, premiering on July 31st at the Village East Cinema, and opening in LA the following week. TWO STEP will be available across major iVOD/cVOD platforms starting on September 1st.
TWO STEP is a throwback Texas thriller in which the lives of James, a directionless college dropout, and Webb, a career criminal with his back against the wall, violently collide. Kicked out of college, James visits Grams, his only remaining family, who dies shortly after his arrival. He finds consolation in the company of Grams' neighbor, Dot, a dance teacher, as he figures out his next move. While settling Grams' affairs, James learns she's been the victim of the 'Grandparent Scam', in which someone posing as James has been slowly bilking her out of thousands. But before James can go looking for the culprit, he shows up at the front door, desperate for money. The culprit, Webb, has his own problems in the form of Duane, who has ordered Webb to pay an old debt or else. And if Webb can't get it from Grams, James will have to do – no matter who stands in his way.
'A slow burn thriller with rich Texas flavor and delicious dialogue.' – VARIETY
'Writer/director Alex R. Johnson dares honor the bygone art of cinematic storytelling. It's a film in which costs – human, financial moral – are always fully counted and felt.' - FILM COMMENT
Jason Tyrrell, Director of Acquisitions and Distribution for Traverse Media said, 'TWO STEP is one of the most riveting films to come out of the festival circuit in 2014, and every moment of the fantastic imagery and powerful performances stick with you long after the credits roll. We are thrilled to be bringing Alex's vision to a wider audience this summer’.
After premiering at the 2014 SXSW film festival, TWO STEP went on to win the Grand Jury Prize at the New Hampshire International Film Festival and the Best Narrative Feature award at the Flyaway Film Festival. It has also played at the International Film Festival of India, Cucalorus Film Festival, Vancouver International, Reykjavik International and many more.
For more information on the film and its release, please visit http://www.traverse-media.com/two-step.html
Posted by Get the Funk Out! at 2:11 PM

Harrod Blank, son of Les Blank, called in to talk about A Poem Is a Naked Person featuring the beloved singer-songwriter and Rock and Roll Hall of Famer Leon Russell, as filmed by documentarian Les Blank 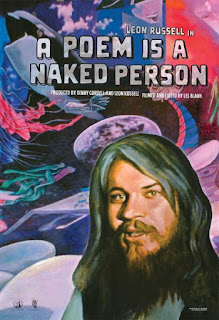 If you missed my conversation with artist/filmmaker Harrod Blank, listen to the show here!

About Harrod Blank
Les Blank’s son Harrod Blank is an artist and filmmaker, trained on the job by his father from an early age. He is known for his work with art cars, making them and also documenting them on film. A cofounder of the annual San Francisco Bay Area event ArtCar Fest, Blank has been building Art Car World, a museum in Douglas, Arizona, since 2005. He has been working for twenty-five years on an epic film project about the Burning Man festival, on which his father served as a cinematographer. Since Les Blank’s death in 2013, Harrod Blank has been running the nonprofit Les Blank Films to continue his father’s legacy, including the restoration, remastering, and release of A Poem Is a Naked Person

An ineffable mix of unbridled joy and vérité realism, A Poem Is a Naked Person presents the beloved singer-songwriter and Rock and Roll Hall of Famer Leon Russell as filmed by documentarian Les Blank between 1972 and 1974. Blank’s camera lets us into the world of Russell and his friends and fellow artists in and around his recording studio in northeast Oklahoma, capturing intimate, off-the-cuff moments and combining them with mesmerizing scenes of Russell and his band performing live. This singular film about an artist and his community never got an official theatrical release and has attained legendary status. Now, after more than forty years, it can finally be seen and heard in all its rough beauty.


The Story of a Poem

In 1972, musician Leon Russell was looking for a filmmaker to make a documentary about him, so he and his record producer, Denny Cordell, called the American Film Institute in Los Angeles to ask who might be a good fit. AFI suggested an exciting filmmaker named Les Blank, who had demonstrated his unique skill at documenting musicians with The Blues Accordin’ to Lightnin’ Hopkins (1968) and A Well Spent Life (1971). In May of that year, Blank and his collaborator Maureen Gosling, fresh from shooting hours of footage in Southwest Louisiana about black Creole music and culture, were making a pit stop in Dallas for the USA Film Festival. It was there that Blank was informed that Russell and Cordell were trying to get in touch with him. Though he had not heard of Russell, Blank was intrigued, so he and Gosling immediately headed north to Oklahoma and met the two men at Russell’s recording complex, Paradise Studios, in Grand Lake o’ the Cherokees, about ninety miles northeast of Tulsa. Blank agreed to shoot a film about Russell as long as he could set up shop at the studio and simultaneously edit his Louisiana footage (which would ultimately become two separate 1973 films, Dry Wood and Hot Pepper).

Blank and Gosling set up his Moviola editing machine and started working day and night. Their new quarters, according to Gosling, consisted of “a five-room floating motel on Leon’s property, which had been used by fishermen in the property’s last incarnation as a fishing dock retreat.” The recording compound was frequented by other artists and musicians, and the environment was communelike. It soon became clear to Blank that the film would be about not just Leon Russell but an entire community of people, including painter Jim Franklin, whom Russell had A POEM IS A NAKED PERSON JANUS FILMS brought in from Austin, Texas, to paint the walls of his recording studio, but who discovered a more interesting canvas in the blank walls of an empty swimming pool. Blank also filmed other musicians who came through, including Eric Andersen, Charlie McCoy, and Willis Alan Ramsey. Blank kept his camera rolling over the course of two years, ending up with nearly sixty hours of 16 mm footage. This included Russell playing music—in rehearsals, recording sessions, and concerts in New Orleans and Anaheim, California—as well as performances by such music legends as Willie Nelson and George Jones. Yet Blank was ultimately after something more ineffable and atmospheric, something that reflected the odd juxtaposition of the state-of-the-art music studio and its rural surroundings. The result, A Poem Is a Naked Person, is more a collagelike, abstract film about a time and place than a straightforward portrait of a performer.


Thus, footage of a building demolition is as crucial to the overall tapestry as Russell’s performances of his singles “Tightrope” and “A Song for You.”


The first cut, which clocked in at just over 100 minutes, was accepted into the 1974 Cannes Film Festival, but the screening was canceled when the print didn’t arrive in time. As history would have it, the film wasn’t released for another forty years. Blank was still a comparatively little-known filmmaker at the time, and while this movie reflects what we now recognize as the genius of one of America’s premiere chroniclers of music and culture, it was not what Russell and his team were expecting, and Russell did not approve the release. Blank had only a work-for-hire contract and therefore didn’t have the rights to the finished product, although he was permitted to show the film at nonprofit venues if he was there in person.


Blank continued to work on the film, shaving off nearly eleven minutes over the years. He considered this essentially lost film his masterpiece, and he always wished it could see the light of day. In early 2013, two months before Blank died, his son, filmmaker Harrod Blank, made contact with Russell via Facebook—the first time the Blank family had been in touch with the musician in nearly forty years. The two continued to communicate, and met face-to-face when Harrod attended Russell’s concert in Oakland, California, in October. That month, encouraged by their friendly encounter, Harrod began work restoring and remastering the film in New York, even though Russell hadn’t yet formally given his blessing to an official release. Working from various elements, Harrod and his collaborators tried their best to match Blank’s most recent cut, a ninety-minute version from 2011.

In 2014, after Russell had seen a remastered Blu-ray of the final version of A Poem Is a Naked Person, he made an agreement with Harrod Blank to release the film. Harrod decided to work with Janus Films on the theatrical release, as he was pleased with the deluxe treatment Janus’s sister company, the Criterion Collection, had just given his father’s work with the box set Les Blank: Always for Pleasure. A Poem Is a Naked Person finally had its official Janus Films premiere at the South by Southwest festival in Austin in March 2015, attended by Russell, who received a standing ovation after the screening. We can safely assume that Les Blank would have been thrilled to be there. Says Harrod, “It was his dream to see this released. I sort of put my life on hold to see this through.” When Russell was asked why it took so long for the film to come out, he responded, “I don’t know. Maybe because it needed to come out now.” With the benefit of hindsight, everyone, not least Russell, recognizes this film as one of Blank’s greatest achievements.

"One of the greatest rock documentaries I've ever seen, as eloquent an evocation of the reality-distortion field around rock stars as D.A. Pennebaker's Don't Look Back or Robert Frank's Cocksucker Blues, but funnier and stranger than either."

"One of the great AWOL music docs. Do not let this minor miracle pass you by."


A POEM IS A NAKED PERSON - a glorious portrait of beloved singer-songwriter Leon Russell as filmed by documentarian Les Blank between 1972 and 1974. A fascinating time capsule filled with wall-to-wall music (including performances by legends such as Willie Nelson and George Jones, amongst many others), the film finally had its world premiere at this year's SXSW Film Festival (with Russell in attendance), and will open theatrically in LA at Cinefamily on July 10, followed by a national release.


An ineffable mix of unbridled joy and vérité realism, A POEM IS A NAKED PERSON lets us into the world of Russell and his friends and fellow artists in and around his recording studio in northeast Oklahoma, capturing intimate, off-the-cuff moments and combining them with mesmerizing scenes of Russell and his band performing live. This singular film about an artist and his community never got an official theatrical release and has attained legendary status; now after more than forty years it can finally be seen and heard in all its rough beauty.