Today 8/20/18 9:00am pst - Actor Christopher Maleki called in to KUCI to talk about his film, “Last Curtain Call,” a family drama set in the music world - starring Christopher Maleki (Passions, Days of Our Lives, Port Charles), David Proval (The Sopranos, Mean Streets), and Billy Wirth (The Lost Boys), will play at the Arena Cinelounge, 6464 Sunset Blvd, in Hollywood from August 24- 30, 2018 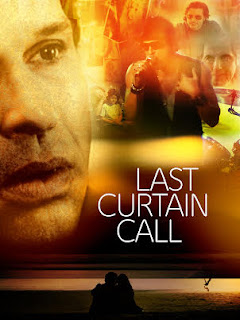 
LOS ANGELES – August, 2018 -- “Last Curtain Call,” a family drama set in the music world that stars Christopher Maleki (Passions, Days of Our Lives, Port Charles), David Proval (The Sopranos, Mean Streets), and Billy Wirth (The Lost Boys), will play at the Arena Cinelounge, 6464 Sunset Blvd, in Hollywood from August 24- 30, 2018. Indie Rights will release the film domestically on digital platforms beginning on August 24th. Prior to the theatrical run and digital release, there will be a red-carpet premiere on August 23 at the Music Hall Theater in Beverly Hills that will also be an invitation-only fundraiser for the Alzheimer’s Association’s LA Walk on November 3rd.

The film tells the story of an aspiring rock star who has neglected his family over his music career, then gets early onset dementia just as he is about to get his big break in the music industry. Knowing that his life is limited, he tries to make up for all the time he lost with everyone he loved but is it too late? Written by Jon Hollis (Relentless) and directed by Jennifer Tadlock (Streets of Hope, Victory by Submission), the film was produced by Allan Hagan (America 101), Tadlock and Maleki and executive produced by Mercedes Arhablou.

Christopher Maleki is a native of Glendale, California. He started acting professionally at the young age of 12. He always knew what he wanted to do. Christopher started working continuously on Teen magazine phase and several series. Then, on September 20th 1996, he was working on the TV show Sliders with fellow actor Ken Steadman when tragedy struck. Ken was the driver of a dune buggy with cameras mounted on; Christopher was a passenger when the vehicle flipped over killing Ken and seriously injuring Christopher. It was a life-changing experience. Christopher decided to take a couple of years off and see the world.

Since his return, Christopher has enjoyed much success taking roles on popular series such as Beverly Hills 90210, Party of Five and recurring roles on Santa Barbara, The Bold and the Beautiful, Pacific Blue, and Days of Our Lives. With many films and episodic TV under his belt, Christopher signed on with the soap Passions, where he played the lovable bad boy "Spike Lester.” Christopher also took notable roles on hit primetime shows such as CSI: NY, and the feature film McBride: It's Murder, Madam opposite John Larroquette.


Maleki, whose own father died of Alzheimer’s in 2017, will introduce the film at the premiere on the 23rd and discuss his plan to participate in the Walk to End Alzheimer's at the LA Zoo on November 3, 2018. Attendees may donate to support his team or start their own team for the LA Walk. To donate to Maleki Team visit http://act.alz.org/site/TR/Walk2018/CA-CaliforniaSouthland?team_id=497959&pg=team&fr_id=11063.

Jennifer Tadlock has over 25 years experience in the film industry. She has worked with such companies and clients as Pringles, Mercedes Benz, Target, Sprint, Pizza Hut, HBO, Showtime, Netflix, the Dr. Drew Show and Millennium Films. She has been a Panelist at Sundance, and other film finance conferences. She is the Director and Producer of Award winning films Streets of Hope starring Michael Badalucco and Avan Jogia. and Last Curtain Call. She produced Victory by Submission starring Alan Autry, Lee Majors, Eric Roberts and Fred Williamson and Co-Produced The Divide Directed by and starring Perry King ( Rip Tide) winning 6 awards to date. She also was the Producer on Emerald Run starring David Chokachi (Baywatch) John Schneider (The Dukes of Hazzard), Vernon Wells (Mad Max 2, Commando) and Steven E. Williams (21 Jump Street).

The screening will be on Thursday, August 23rd at the Laemmle’s Music Hall Theatre, 9036 Wilshire Blvd. in Beverly Hills. The film will be shown at 7:30 pm, with a cocktail reception and Q&A with the filmmakers to follow. The film will play at the Arena Cinelounge in Hollywood from 8/24- 8/31. For showtimes visit: http://arenascreen.com/event/last-curtain-call

The Alzheimer's Association is the leading voluntary health organization in Alzheimer's care, support and research. Our mission is to eliminate Alzheimer's disease through the advancement of research; to provide and enhance care and support for all affected; and to reduce the risk of dementia through the promotion of brain health. The Walks to End Alzheimer's is held annually in more than 600 communities nationwide. To register for the walk nearest you please visit www.alz.org/walk.