7/22/19 - 9:00am pst - CHERIE CURRIE & BRIE DARLING joined Janeane to talk about their new album - The Motivator, their Grammy Museum gig and more! 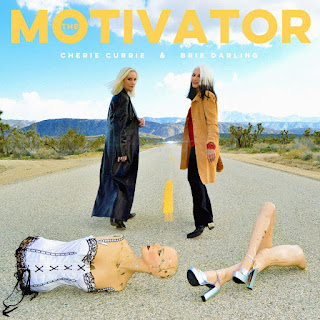 LISTEN to today's conversation with Cherie and Brie!

Release The Kinks Classic “Do It Again” as Their New Single

New Album “The Motivator” - Out August 2

Stream "Do It Again"

(Los Angeles, CA) – July 19, 2019 – Los Angeles-based, female rock icons, Cherie Currie and Brie Darling have released their new single, The Kinks classic “Do It Again” today. You can stream “Do It Again” HERE

“Do It Again” along with their covers of The Youngbloods’ "Get Together" and T. Rex’s "The Motivator" will appear on their debut album, The Motivator which is set for release August 2, 2019 on Blue Élan Records and is available for pre-order.


Cherie & Brie are also set to perform songs for the very first time from the new album at the Grammy Museum in Los Angeles on Thursday, August 1. Tickets Available Now.

The Motivator was produced by the six-time Grammy nominated Dave Darling (Brian Setzer, Stray Cats, Janiva Magness, Tom Waits) and features nine classic covers by bands including The Rolling Stones, Stevie Wonder, and John Lennon, plus three powerful new originals, “Too Bruised,” “I’m Too Good, That’s Just Too Bad” and the topical “This Is Our Time.”

Guests on the album include a host of family and friends who came in to do backups, including Currie’s sister, actress Sondra Currie, her ex-husband, actor Robert Hays; friends, Susan Olsen of Brady Bunch fame, Leslie Koch Foumberg, and actress/director, Allison Scagliotti. Darling’s brother, Henry Berry is on “He Ain’t Heavy”; and brother Phil Berry does a guitar solo on the Kinks tune “Do it Again” while her sister, Rory Berry Bishop plays drums on Thunderclap Newman’s “Something in the Air.” Patti Quatro—Suzi’s sister and a member of Fanny—plays guitar and sings on “For What It’s Worth.”

The Runaways front-woman and solo artist, Currie, met the Fanny drummer and singer, Darling, in 2017 and immediately connected. Currie had come in to contribute vocals to Fanny Walked the Earth, a reunion album from the trailblazing Fanny, the first all-female band signed to a major label (Reprise) in 1969. Though the two musicians were certainly admirers of each other, they had not yet met until that session. Once connected, the idea to continue collaborating was hatched and soon the idea to record an album was solidified.

It was decided they would record an album of cover songs that resonated with the duo. The covers chosen mostly share—unintentionally—a socio-political resonance that’s as relevant today as when the songs were written. “The original album concept was that Brie was going to sing a few, I’d sing a few, and we’d back each other up,” furthers Currie. “But I knew our voices really work well together. On T. Rex’s ‘The Motivator,’ Brie did a great soulful rock scratch vocal but maybe I have more of a tough rock quality to my voice, so I think Dave decided I was going to sing it. But in my head I heard a duet, me doing the first verse, her on the second verse….and that started the dialog of using our voices together as a concept. Our voices complement each other, so we decided we should share the majority of these songs, because it makes them better.” Producer Dave Darling says, "It's extremely rare to have two such powerful vocalists in the same band. Cherie's a steam roller and Brie's a flame thrower. That just doesn't happen!"