Judy Davids, author of ROCK Star MOMMY!, Founder of Detroit Mom band The Mydols, and Editor of Royal Oak Patch featured on the first "Get the Funk Out!" Show airing September 26, 2011! 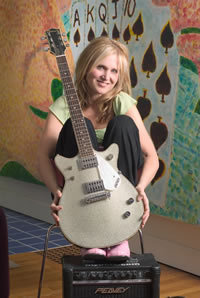 So excited to debut my new public affairs show at KUCI 88.9fm called "Get the Funk Out!" And my first guest is one of the most inspiring women I have ever met - Judy Davids, author of Rock Star Mommy, founder of the Detroit Mom Rock band - The Mydols, and creative powerhouse!


Listen to Judy's interview on "Get the Funk Out!" on KUCI 88.9fm
ABOUT JUDY DAVIDS

Judy Davids was 42 when she picked up a guitar for the first time and decided to start a rock band, or make that, a “mom” rock band. Surprisingly, the one thing in her life that she didn’t consider herself to be an expert at made her famous. The Mydols, her band of four Midwestern housewives/mothers drew the attention of the national media and soon she found herself in the pages of the supermarket tabloid The Sun whilst shopping for Lunchables.
Davids has appeared in People Magazine, The Wall Street Journal, USA Today, The Washington Post, The New York Daily News, The London Times and Making Music, to name a few. She has been interviewed on numerous radio stations across the United States including the nationally syndicated Mitch Albom Show. The Mydols have been on national television many times, including the Today Show, Inside Edition, The Late Late Night Show with Craig Kilborn, CBS Sunday Morning, and The Greg Behrendt Show.
Davids’ house, which is the background of The Mydols’ website, was featured on HGTV’s Generation Renovation.
In 2005, she was invited to Rockrgrl Music Convention in Seattle, Washington where she spoke on two panels: “Ho Ho Ho – Lyrics as Humor” and “Life after Birth: Can you be a Mom and a Musician too?”  She has been regional coordinator for Mamapalooza, the festival for moms who rock, since 2005.

The Mydols sophomore release “Born to Iron” was nominated for “Best Pop/Rock recording at the Detroit Music Awards. Davids has written the lyrics to several Mydols’ songs and designs and writes The Mydols website. She lives in Royal Oak, Michigan with her husband John, sons Dylan and Willie.  She has a Black Labrador Retriever named Ozzie.