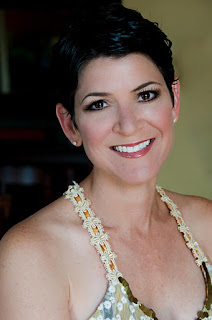 This week on my new show, "Get the Funk Out!" Laura Roppe joins me to talk about her I'm Still Hear music video (a Youtube sensation with over 750,000 hits and counting!), music, life, kicking cancer in the butt, and her up-coming funny and poignant memoir, Rocking the Pink, to be released Spring 2012.

Listen to Laura's interview on "Get the Funk Out!" on KUCI 88.9fm

Here's more about Laura and be sure to check out her great videos on Youtube.

Back in 2008, Laura abandoned a successful legal career and rocketed onto the San Diego music scene with the release of her first album, "Girl Like This,” finding critical acclaim and a home in her local radio market. Within weeks of Laura’s music debut, however, she learned she had triple negative breast cancer, an aggressive form of the disease, and immediately underwent surgery and seven months of grueling chemotherapy and radiation treatments. Laura thought her musical dreams, and perhaps her very life, were over.

When Laura's cancer treatments finally ended in 2009, Laura’s song, "Float Away," won Americana Single the Year at the Los Angeles Music Awards in Hollywood, California. She launched a tour of the UK to promote "Girl Like This" and her music found a home in multiple major BBC radio markets, landing as high as No. 5 on the Amazon UK charts.

Throughout her cancer treatments, Laura continued to write music, but with a new sense of purpose and clarity. Throughout 2010, Laura recorded those songs, and she also wrote a memoir about her musical/life/cancer adventures.
In early 2011, Laura released her sophomore album, "I'm Still Here," including the songs written during her cancer treatments. The album was produced by Matthew Embree, the frontman and lead guitarist of indie rock sensation, Rx Bandits. When Laura released her new album, she was eager to find out if the world would embrace her new clarity. It wasn't long before Laura received her answer: For twenty-three consecutive weeks in 2011, Laura was ranked in the Top 10 by Billboard Magazine as one of the Top 50 emerging artists in the world (peaking at Number 3). Respected UK music magazine, Maverick Magazine, raved that "I'm Still Here" is a five-star, "must-have" album. Influential music blogger Wildy's World called it a "brilliant and emotionally naked artistic turn."

Laura has become somewhat of a Youtube sensation, as well. The video for her bucket list song, "George Clooney," garnered Youtube Honors in Canada, Australia, Spain, India, Japan, France, Germany, and more as a most-watched video. Her video for "Heart Inside Your Palm" amassed 250,000+ views in five days. And her video for “I’m Still Here,” released in late September 2011, already has over 650,000 views and several Youtube Honors, including Top 12 most watched video in entertainment and 31st most watched overall. Meanwhile, Laura's book has also found success. Her funny and poignant memoir, Rocking the Pink, will be released as a “lead title” in Spring 2012 through Seal Press, a division of U.S. publishing powerhouse Perseus Books (Publisher of the Year in 2007). The book has already been endorsed by actor Jack Black, Grammy-winning music producer, Mark Hudson, and best-selling author, Joni Rodgers.
Posted by Get the Funk Out! at 1:49 PM