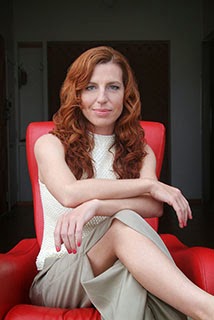 If you missed Tanna on today's show, listen here!

Tanna Frederick recently wrapped production on Henry Jaglom’s romantic mystery “Ovation” starring opposite James Denton. The story is set in the backstage world of theatre where the cast struggles to keep their play afloat while they search for a murder suspect amongst themselves.

Later this year she’ll star as a single mother who returns to Iowa (Frederick’s hometown) to deal with her past in “Garner, Iowa”.

She’s also just ended almost a year long performance in “The Rainmaker” at the Edgemar Theatre in Santa Monica. The Los Angeles Times gave it Critics’ Choice and said, “The standout of this terrific cast is Tanna Frederick’s acerbically yearning Lizzie…It’s a transformation not to be missed.”

Off-screen, Frederick has proved just as driven and talented. A fitness aficionado who runs daily, Frederick ranked 52nd out of 1,321 women in her division in the LA Marathon. She is a second-degree Tae Kwon Do blackbelt and a passionate surfer. She founded “Project Save Our Surf,” a non-profit that promotes clean oceans and clean water initiatives. She is also founder of the Iowa Film Festival, now in its’ seventh year. She was named the recipient of the University of Iowa’s Distinguished Alumni Award in 2012 and returned there this year to speak at their commencement ceremony.

The plot of this movie might be familiar - a struggling young actress from middle America who can't seem to get a break happens to meet a well-connected industry vet who envisions her as a future sensation, and a movie star is born. While that was the story told anew in Henry Jaglom's feature, the acclaimed “Hollywood Dreams,” it also happens to be pretty close to the real-life story of the film's dynamic and engaging leading lady. But actress Tanna Frederick, who drew raves for her tour-de-force as aspiring starlet Margie Chisek, is quick to point out that although they have similar stories, she's far from the chaotic and sometimes naive Margie.

Audiences who have seen “Hollywood Dreams” and “Queen of the Lot” might be forgiven for making that mistake, as Frederick's uncanny rendering of an ambitious and charming starlet who can barely restrain her fragile emotional state, is a compelling portrait of an actress in the tradition of Bette Davis' performances in “All About Eve” and “Dangerous;” and Gloria Swanson's painfully deluded Norma Desmond in “Sunset Boulevard.”

Indeed, many critics have harkened back to an earlier era of screen star, noting
that Frederick's screen presence recalls a "young Bette Davis on crack" and compares
favorably to legends like Lucille Ball, Judy Garland and Fanny Brice. "Hollywood Dreams is driven by Ms. Frederick's no-boundaries commitment to her broken character," wrote the New York Times, "a performance that is startling as it is touching."

"Bette Davis is my inspiration right now," confesses the actress, who, like Margie, is a devoted cinephile. "I don't feel that I can possibly compare to her, but I admire the way she was always in the moment, and the way that theatre and her life and her art were inseparable." "Comedy is based on pain; most great comic performers have great pain and live in a huge amount of denial," says Frederick. "There's an early tragedy that translates into a masking, and there's a strange truthfulness to that. I wanted people to have sympathy for Margie, but be a little confused as to whether they loved her or hated her."

Frederick’s relationship with Jaglom was extended to “Irene in Time” in which Frederick was reunited with “Hollywood Dreams” co-stars David Proval, Zack Norman and Karen Black.

Later she starred in Jaglom’s romantic comedy “Queen of the Lot” opposite Noah Wyle. The film picked up “Hollywood Dreams” Maggie Chase character three years later, where Chase, now an action-movie star, is under house arrest for multiple DUIs.

Frederick is currently starring with Judd Nelson in Jaglom’s film “Just 45 Minutes From Broadway.” She has also wrapped production on two other features – “The M Word” with Corey Feldman and Michael Imperioli and “The Farm, “ the first production under her latest venture, Project Cornlight that aims to develop Iowa-based films and other projects showcasing Iowa.

All the while, Frederick has become quite the LA stage actress. She is currently starring (to rave reviews) in “The Rainmaker” at the Edgemar Theatre in Santa Monica. The Los Angeles Times said, “The standout of this terrific cast is Tanna Frederick’s acerbically yearning Lizzie…It’s a transformation not to be missed.” Prior to that she starred in Clair Chafee’s “Why We Have a Body,” which she also directed. She had long runs as the title dog in A.R. Gurney’s “Sylvia,” and in two plays written by Henry Jaglom, “Just 45 Minutes From Broadway,” and “Always… But Not Forever.”

Frederick, a proud Iowan, knew she wanted to be a performer since childhood. "Iowa is really an amazing place for theatre," she enthuses. "Maybe because people don't have as much to do, they spend a lot of time expressing themselves. I started doing local and children's theatre in fourth grade, and was basically doing five shows a year for most of my life."

When she went to college at the University of Iowa, she double majored in theatre and political science/international relations. Despite the daunting academic challenges of

two disparate courses of study, Frederick thrived, particularly enjoying working with younger playwrights on new works. "With the playwriting program and the Writer's Workshop, I did a lot of new work. I'm so grateful for that, because when I came to California, I had a very open mind about strange, independent and unusual projects."

There were plenty of independent projects for Frederick to work in after her graduation as class valedictorian and the move to Hollywood, but like many young performers, regular paying work and success seemed far away. That's when Frederick learned from a friend that independent director Henry Jaglom had a history of responding to fan letters. Even though she'd never seen his films, Frederick wrote to Jaglom asking for an audition. The director responded by casting her in his play, “A Safe Place.” Her work so impressed him, that soon she was starring in “Always - But Not Forever,” Jaglom's theatrical revision of his earlier screen work, and preparing her to star in

Jaglom, who has made a career out of casual but pointed observations about the intricacies of human relationships against the backdrop of show business. "He has this objectivity about Hollywood, having been there so long, and the film played on my subjectivity of that experience. He provided the framework in which Margie could live - he's known all of these characters as people, and I just put myself in the reality of the moment."

Meanwhile, Frederick is looking forward to hosting the seventh annual Iowa Film Festival - an event she founded. "People were so thrilled to have that festival in their community," she says. "All kinds of people - lawyers, students, regular people - were inspired to try their hand at filmmaking, and this year the event has increased threefold." She was recently named the recipient of the University of Iowa’s Distinguished Alumni Award for 2012 and also received the 2012 CineCause Award at the Julien Dubuque Film Festival.

A devoted fitness advocate whose impressive Tae Kwon Do skills can be seen in “Hollywood Dreams,” Frederick is also spending as much time as she can at the beach where she admits to having a "serious mistress" - the surf. "I never expected to become addicted to surfing," she admits. "I guess when you grow up landlocked, you never think about things like that. I've been doing it for a few years now, and it's
provided a great balance in my life. I like the aspect of constantly facing a new challenge, and the danger - I broke my nose surfing and have gotten pretty banged up. It's a humbling experience - you're up against this creature, and if you don't respect it, you drown." As a sign of her passion for the art of riding the wild surf, Frederick started "Project Save Our Surf," an annual event she co-hosts with legendary surfer Shaun Tomson which has raised thousands of dollars for various ocean charities and clean water initiatives. Frederick also serves on the Board of Directors at Tumelo Home. Located in Johannesburg, South Africa, the charity provides full residential care and training to children with severe and profound mental disabilities.