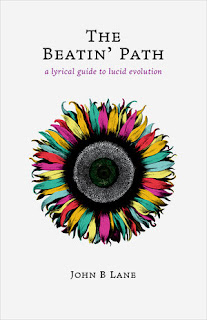 Where does a person find solace in a world rushing headless into the Golden Age of Nonsense? If a Netflix binge, a bong, or a box of chocolates aren't your cup of tea, you'll find an oasis of sanity on The Beatin' Path.


'The Beatin’ Path is a bold and timely new worldview, and a fresh leap forward for the art of literature!'

John B Lane is an award-winning author and instructional designer, and a pioneer in online learning. He began his professional career as a journalist, and has written for numerous publications, from the Washington Post to the Huffington Post.

Which part of the human mind will finalize our fate? The part that wrote the Gettysburg Address – or the part that murdered Abraham Lincoln? The Beatin’ Path - a lyrical guide to lucid evolution levels a look at both the enemies of human progress and the better angels of our nature.

The cast of this collection includes the bird who wouldn’t fly, Flim and Flam (the richest men in the world), Satchel Paige, Galileo, Moondoggie, the monster and the fool, Abraham and Onan, George Orwell, Charles Darwin, young Hector, and the alchemist’s apprentice. Presented in short bursts of truth, The Beatin’ Path is an illustrated, inspirational kaleidoscope of poetry and prose, of heroes and villains, of humor and of hope.

JOHN B LANE can discuss:
The format of The Beatin’ Path; more like a record album or mosaic than a typical book

The only taboo left in America

The inconvenient structure of the human brain

How belief systems undermine our ability to evolve, and therefore, to survive

The tools humans have developed to overcome biases and fixed beliefs

Why independent thought is so important, and how it can be cultivated

The challenges of challenging the status quo

John B Lane is an award-winning author and instructional designer, as well as a pioneer in online learning. He began his professional career as a journalist, and has written for numerous publications, including The Washington Post and Huffington Post.
Posted by Get the Funk Out! at 6:49 PM