1/7/19 at 9:15am pst - Kathleen Day joined Janeane to talk about her latest book, "Broken Bargain: Bankers, Bailouts, and the Struggle to Tame Wall Street 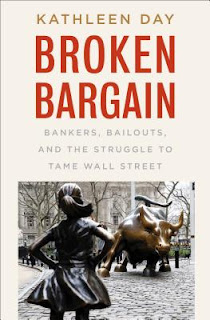 From an author whose last book was named by “BusinessWeek” as one of the Top 10 Business Books of the Year, as well as recommended for reading by the “New York Times Sunday Book Review” comes to us “Broken Bargain: Bankers, Bailouts, and the Struggle to Tame Wall Street” (Yale University Press, 1/8/2019). This is SUCH an important topic and one I hope we will all pay close attention to in the new year... getting our economic systems fixed and our banks in line is something every American can understand better, and hopefully care about!

Kathleen Day's "Broken Bargain" explores in plain English the history of Wall Street scandals, why the government keeps bailing out bankers, and why taxpayers of all political stripes should be mad about it beyond the obvious.

"A fluent if dispiriting study of an economic system that forgives those at the top so long as those at the bottom remain willing to foot the bill."-Kirkus Reviews

In an interview, Kathleen Day can discuss:


See more details about the book in the press kit here: https://docs.google.com/document/d/1mm0YXr7JFXvVMShr6YFHcKGnDm6TY9vYOdVVTeBXY9U/edit

Kathleen Day spent 30 years as a business journalist with the Washington Post, Los Angeles Times and USA Today before joining the Johns Hopkins Carey School of Business as a professor of finance in 2013. She contributes to the Washington Post, USA Today and Ozy.com and has appeared on The Diane Rehm Show, CNBC, and Fox News. She lives in Washington, DC.