Kalpna Singh Chitnis is an American Filmmaker, Actor and Poet -joined me today at 9:30am pst! 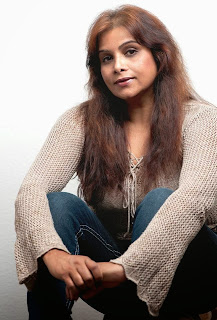 If you missed Kalpna on today's show, listen here.

ABOUT KALPNA SINGH CHITNIS
Kalpna Singh Chitnis is an American Filmmaker, Actor and Poet of East Indian descent based in California, USA. She is also the Founder, Director and CEO of the Silent River and the Silent River Film Festival in Irvine California.

Born in Gaya, Bihar India, where Buddha got enlightenment, Kalpna grew up with much influence of Buddhism on her despite her Hindu background. Educated at Magadh University Bodhgaya, India and at the New York Film Academy in Universal Studios, Hollywood, she began her career as a writer and lecturer of Political Science. She also worked as an actress and a model, before turning to the film directing.

Kalpna found success as a writer at a very young age and won many awards, including the prestigious Rajbhasha Award given by the government of Bihar, India, for her first poetry collection in Hindi “CHAND KA PAIVAND.” Kalpna’s writings have been published in major literary magazines and journal of Indian SubContinent, such as Hans, Kadambini, Saaptahik Hindustan, Dhramyug, Pahal, Aajkal, Navbharat Times and many others. She has also been featured in Times of India, Femina, Care and other publications in North America.


After earning her Master’s Degree in Political Science from the Magadh University, Bodhagaya, Kalpna taught International Relations to the PostGraduate students at the Gaya College for a year. She was given the Title of Bihar Shree (The Jewel of Bihar) for her contribution to the Hindi literature, when she was only 21.

In 1994, after getting married, she moved to the United States and lived in Lisle, Illinois for
seven years, taking a break from her career, making family and children her main priority.
In 2000 she came to California, to realize her dream of becoming a filmmaker. After graduating from the New York Film Academy in 2004, she started to make films. She is now settled in Irvine, where she raises her three young children age 10-15, follows her passion.

Kalpna, is currently working on taking the Silent River Film Festival to another level, putting
the City of Irvine on international map, now also going to be known for Cinema and an
International Film Festival.