Janeane chats with writer/columnist, filmmaker, comedian, and author of Life of the Party - Tea Hacic-Vlahovic 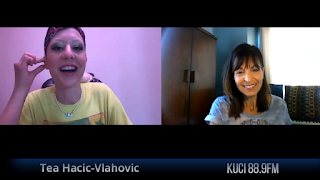 
Everyone wants to get out right now (even if we can't), and the bestselling debut

Life of the Party by Tea Hacic-Vlahovic (pronounced: TAY-UH HA-CHEECH VLA-HO-VEECH) is the perfect escape— especially for people who like to have a good time!

It-girl Tea Hacic-Vlahovic's many hats include writer/columnist for Wired, Vice (among others), performer, comedian, TV host, and filmmaker. Tea is a smart, fun, exciting presence, and her true-life adventures inspired a book you won't put down until you finish!


Read These 15 Books in Quarantine
—Paper MagazineCalling all fans of dark comedy! Life of the Party follows Mia in Milan as she indulges in a life of unadulterated glamour, ping-ponging between the highs and lows that men and drugs have to offer, only to be confronted with her own self at the end. Written by former columnist for VICE and WIRED Italy, Tea Hacic-Vlahovic is a Croatian-born writer and comedian whose debut automatically marks her as a voice to watch out for.
New and Forthcoming Indie Press Gems
—Publisher's Weekly
Life of the Party

Tea Hacic-Vlahovic. CLASH Books, May 2020.
In this clever debut novel of fashion and nightlife, readers are introduced to Mia, an expat newly moved to Milan. The drugs, nightclubs, and men blur together into a seemingly nonstop, Fear and Loathing in Las Vegas-style fever dream as intense as it is dripping with style. CLASH Books was founded in 2015 by Leza Cantoral and Christoph Paul to publish books that imbue a sense of punk rock, goth cool. The press has published the work of authors like Sam Pink, Mark de Silva, Lindsay Lerman, and more.—Publishers Weekly

"Tea Hacic-Vlahovic is an Oscar Wilde with fake eyelashes and this book is a Fear and Loathing for the late Berlusconi-era; a deep walk of shame that tiptoes between a bewildering Bildungsroman and a fever dream of social climbing and social embarrassment."--OLIVER KUPPER, EDITOR-IN-CHIEF OF AUTRE MAGAZINE

"A recollection of youth as seen through the dichotomy of control vs desperation, Americana vs. Milanese, luxury vs poverty and uppers vs downers."--FLAUNT MAGAZINE


"Tea recounts with brutal honesty the period in which Milan officially became the Italian city that everyone hates and envies."--VICE ITALY

Life of the Party is a darkly humorous narrative set in Milan. The story swan-dives into the underbelly of Milanese fashion and nightlife, through the eyes of Mia, a young expat. She came to Milan to escape her problems but only found new and more glamorous ones. Mia indulges in the highs and lows that drugs and men can offer, only to be left with herself in the end. Can you lose your innocence if you never had it in the first place? Tragic, fun, and artful-- Hacic-Vlahovic crafts a Beat novel for the Instagram generation. Life of the Party will leave you with a hangover and a "VIP" stamp on your heart.

Tea Hacic-Vlahovic is a Croatian-American writer and performer. She's been a columnist for Vice and Wired Italy, contributing editor of Wonderland Magazine and contributor to magazines like Autre, Oyster and i-D. She's the founder and creative director of a parody art magazine, STAI ZITTA. She lives in Los Angeles with her husband and their dog. . She has a BA in fashion design from Nuova Accademia di Belle Arti. Life of the Party is her debut novel. Follow her on IG & Twitter @teahacic
Posted by Get the Funk Out! at 3:04 PM