Great conversation with Jeffrey James Binney, a Salt Lake City based actor, singer, comedian and “athlete” about his new film, ONCE IS ENOUGH - a transformational journey an homage to his deceased mother

AWARD-WINNING DOC
ONCE IS ENOUGH 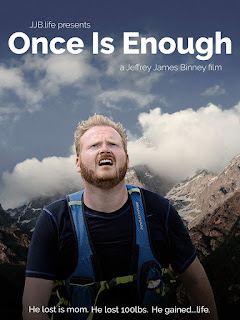 LISTEN or WATCH the conversation 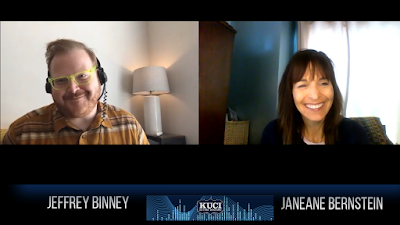 Once is Enough, a documentary that depicts the transformational journey of LGBT husky comedian who, after losing his mother to obesity-caused heart disease, sets out to lose 100 pounds and run one of the world’s most difficult 100 mile ultramarathons – and lives to tell jokes about it. Once is Enough will launch on Amazon on May 8th and will soon-after be made available on all VOD platforms via Indie Rights.

Part documentary/part stand up comedy, Once is Enough is an award- winning hybrid film following a young overweight comedian, in the wake of his mother’s obesity- caused death, setting out on a desperate mission to avoid the same fate. The first component documents the journey of Jeffrey training for and running one of the world’s most difficult 100-mile marathons, the Leadville Trail 100. The second component is story-based comedy commentary on the journey. The final product, a seamless juxtaposition of these two components, is a heart-felt and inspiring 75-minute journey that leaves the audience cackling through tears.

Along the way, the spunky Jeffrey manages to wrangle in the talented Ian Sharman, ultramarathon runner, coach and blogger for iRunFar, who holds the record for the Grand Slam of Ultrarunning and is the winner of the 2013, 2015, 2016 and 2017 Leadville Trail 100, to be his coach. As the marathon provides a much-needed respite from the emotional torment and grief that seemed inescapable, Sharman’s encouragement helps provide Jeffrey with the confidence and determination to keep his eye on the prize.

“Having just moved to Los Angeles to pursue a career in film/television/comedy, all I wanted to do is run, write jokes and repeat, “says Binney. “Having shared this with a concerned friend, they suggested that I combine this into one creative project and the light bulb flipped on – Once is Enough.”

“Better than any therapy could buy, this project was just ridiculous and grand enough to help me navigate through, and emotionally process losing the most important person in my life. Hopefully, my story helps inspire someone else to seek theirs,” he continues.

Jeffrey James Binney is a Salt Lake City based actor, singer, comedian and “athlete.” He grew up on a farm in Laredo, Missouri before moving to Brooklyn, New York and later Los Angeles after receiving his B.F.A. in Musical Theater Performance from Missouri State University. Jeffrey has been seen on Late Night With David Letterman, in the first National Tour and Chicago Company of the Broadway musical The 25th Annual Putnam County Spelling Bee, and at comedy clubs and festivals across the country.

More about Jeffrey at www.JJB.life.com.
Posted by Get the Funk Out! at 10:26 AM