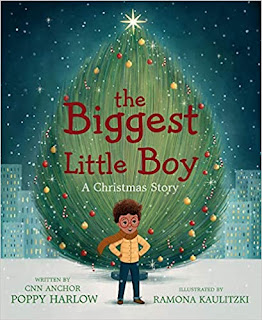 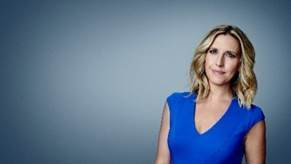 Emmy-nominated CNN news anchor chats with
KUCI's Janeane Bernstein about her Christmas classic with lots of heart:
THE BIGGEST LITTLE BOY: A CHRISTMAS STORY
WATCH the conversation with Poppy Harlow below:
LISTEN to the show

THE BIGGEST LITTLE BOY: A CHRISTMAS STORY is a sweet Christmas story about a little boy in search of the enormous Christmas tree of his dreams, who discovers that the holidays are about so much more than material things. Kirkus calls the debut picture book by CNN news anchor Poppy Harlow, “an engaging story that small children will relate to. Delightful and resonant.”

Luca loves BIG things. BIG trucks. BIG buildings. BIG bowls of pasta. But what he wants most is the biggest Christmas tree of all. With Christmas approaching, Luca goes in search of a special tree. But he soon finds out that what matters most is having a BIG heart.


In interviews, Poppy Harlow talks about:

· The personal inspiration for writing the book: While walking through a local Christmas tree market with her son Luca, then not even one year old, he reached out his hand and grabbed the branch of a tiny little Christmas tree. He held on as we passed by almost dragging the tree along with us. In that moment the idea came to write a book for her son and for families everywhere about slowing down and looking out for others.

· Influenced by Midwest upbringing: Poppy grew up in Minnesota, where the community knew and cared for neighbors as they would their own family. The spirit of the holidays is a good reminder to bring that kindness and generosity to others.

· Parenting two kids: Raising Luca (3) and Sienna (5) with her husband in Brooklyn, NY has given Poppy an even greater appreciation material things are not the most valuable in life, it’s having a big heart and the spirit of generosity and love that brings the most joy.

· From CNN to back-to-school: this fall, Poppy announced a hiatus from her hosting duties at CNN for a two-semester Master of Studies in Law degree program at Yale. This move was inspired by her father James Harlow, an intellectual property litigator who would bring his daughter to his law office, as well as from interviewing Supreme Court Justice Ruth Bader Ginsburg, who recalled pursuing a law degree while caring for her young daughter and cancer-stricken husband.

Poppy Harlow has crafted a timeless Christmas story brimming with good cheer, and Ramona Kaulitzki’s vibrant artwork brings the festive holiday season to life. Harlow says of the book, “In a world evermore focused on what things we have instead of what fills our heart, my hope is that The Biggest Little Boy can remind us all (parents and children alike) what really makes us happiest.” THE BIGGEST LITTLE BOY reassures all young readers that they are special, just the way they are. 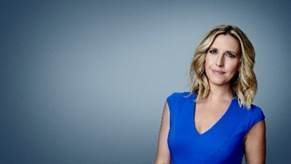 Poppy Harlow is a twice-Emmy-nominated journalist who co-anchors the morning edition of CNN Newsroom and hosts the successful podcast Bossfiles with Poppy Harlow. Originally from Minnesota, she now lives in Brooklyn, NY, with her husband Sinisa and their children Sienna and Luca. Please visit her online @poppyharlowcnn.

About Illustrator Ramona Kaulitzki:
Ramona Kaulitzki's biggest passions have always been drawing and storytelling. She lives outside of Berlin where she works as a freelance illustrator. Please visit her online @ramonakaulitzki.