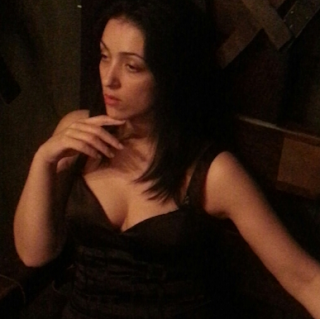 Stavroula Toska is an original content creator, writer, director, producer and actor based in New York City by way of Greece. Her debut feature documentary, Beneath the Olive Tree, was narrated and executive produced by Academy Award winner Olympia Dukakis. Based on journals found buried beneath an olive tree in Greece the film brings to light the stories of Greek women who were exiled in concentration camps during the Greek civil war with the support of the United States and Great Britain. Beneath the Olive Tree went on to receive multiple awards and recognition in the US and abroad. Toska's most recent project is the multi-award-winning scripted series, SWITCH. Based on her personal experiences as an undercover dominatrix, Toska takes viewers on a journey to the riveting world of BDSM from a deeply benevolent, unorthodox and cerebral POV by following Stella (based on Toska's real life character) and the main characters as they navigate leading a double life, the struggle for power, identity, ambition, love and family. SWITCH is a workplace drama exploring the many aspects of human nature, trauma and conditioning that most people never discuss openly, and follows in the steps of Brene Brown's work on vulnerability and Bessel Van Der Kolk's decades of research focusing on the brain, mind and body in the healing of trauma.

Season 1 of the short form version of SWITCH is now available to watch exclusively on www.switchtheseries.com

Stavroula's other works as a producer and/or director include In The Vice, Pronoia, The Sounding, LIVIN' THE DREAM, Monsters, and The New Abolitionists, a feature documentary on human trafficking. She serves as a mentor for youth interested in filmmaking through the Reel Works Organization, she is on the board of directors at the Hellenic Film Society USA, and serves as the Events Director for the Film Fatales New York Chapter.

SWITCH will be screening at the Dances with Films Festival June 22, 2019.
WEST COAST Premiere