Monday 11/14/16 Ian Scheffler and I chatted about his book, "CRACKING THE CUBE: Going Slow to Go Fast and Other Unexpected Turns in the World of Competitive Rubik’s Cube Solving." 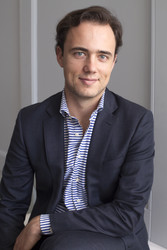 “Scheffler provides the first comprehensive book on the global phenomenon of speedcubing. Much has changed since the first world championship was organized in Budapest in 1982. But the emotions were all there already—good to see they haven’t cooled in over three decades. The cubing community is growing ever larger, younger—and faster!”—ERNŐ RUBIK, creator of the Rubik’s Cube

If you missed Ian Scheffler on today's show, listen here! 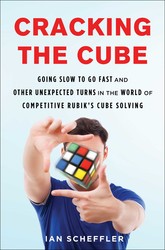 CRACKING THE CUBE: Going Slow to Go Fast and Other Unexpected Turns in the World of Competitive Rubik’s Cube Solving (Touchstone; on-sale October 18, 2016; $26; Hardcover; ISBN: 978-1-5011-2192-0) by Ian Scheffler dives into the colorful world of Rubik’s Cube. Invented in 1974 by the reclusive Hungarian architect Ernő Rubik, the puzzle was famously popular in the 1980s. It has since come roaring back, inspiring competitions around the world, not to mention robots, movies, and Edward Snowden. As Scheffler shows, this bout of Cube Fever is anything but nostalgia.

When Rubik invented the Rubik’s Cube (or, rather, his Cube) in his mother’s apartment, out of wooden blocks, rubber bands, and paperclips, he didn’t know if it could be solved—let alone that it would become the world’s most popular puzzle. Since its creation, the Cube has become many things to many people: one of the bestselling children’s toys, a symbol of intellectual prowess, a frustrating puzzle with 43.2 quintillion possible permutations, and now a worldwide sporting endeavor. The World Cube Association (think FIFA, only with Rubik’s Cubes) hosts scores of competitions throughout the U.S. and in dozens of countries each year, across six continents.

Challenged by a childhood friend, Toby Mao, who turns out to be one of the fastest cubers in the world, Scheffler attempts to break into speedcubing—think chess played at the speed of ping pong—while exploring the Cube’s rise to iconic status around the globe and the lessons that can be learned through solving it. Scheffler’s goal is to solve the puzzle under 20 seconds—the equivalent of running a sub-four-minute mile. After two years, he finds himself on the cusp of success, only to discover that speedcubing is far more challenging than he ever imagined. (Scheffler does eventually go “sub-20,” averaging 18.96 seconds at the Liberty Science Center, in December 2015.)
En route to going “sub-20,” Scheffler encounters legendary figures from the Cube’s first wave of popularity and the contemporary stars of its underground culture, painting a vivid picture of the diverse community dedicated to solving Rubik’s masterpiece as quickly as possible. (Among some of the most famous cubers are celebrities including Will Smith, Justin Bieber, Ryan Gosling, the rapper Logic, and NFL quarterback Ryan Fitzpatrick.) To his own surprise, Scheffler journeys to Budapest to meet Rubik. Like Willy Wonka, the inventor guards his privacy, and hasn’t been interviewed at length since 1986, when John Tierney of the New York Times profiled him for Discover Magazine. Now in his seventies, Rubik is still tinkering away with puzzles.

In CRACKING THE CUBE, Scheffler reveals that cubing isn’t just fun and games. It’s a way of life for many around the world. Readers meet Dr. Jessica Fridrich, who won the Czech National Championship as a teen in 1982. Now an engineering professor at Binghamton University, Fridrich accidentally popularized the fastest method of solving Rubik’s Cube. Minh Thai, a Vietnamese refugee and winner of the inaugural Rubik’s Cube World Championship, held in Budapest in 1982, today owns a wholesale fragrance business in Los Angeles but still solves his Cube twenty times before bed each night. Eva Kato of New Jersey leads the vanguard of female cubers—she’s the second-fastest in the world—while Kentucky’s Lucas Etter holds the world record for the quickest single solve, 4.90 seconds—and he’s only fourteen years old. What’s more, for over a decade, students at UC Berkeley have enrolled in a popular mathematics class called “Learn to Solve the Rubik’s Cube,” the final for which is simple: solve Rubik’s Cube or you fail.
For Scheffler, the road to “sub-20” is not just about memorizing algorithms or even solving Rubik’s Cube. As he learns from the many gurus who cross his path, from pint-sized kids to engineering professors, it’s about learning to solve yourself.

Ian Scheffler’s ties to the Cube go back to his childhood, as does his interest in math, science, and engineering. In 2008 his team won the U.S. Department of Energy’s National Science Bowl, a Jeopardy-style competition, and he traveled as a delegate to the 49th London International Youth Science Forum. He has written for The New Yorker, The Guardian, Los Angeles Times, and the Los Angeles Review of Books. He holds a degree in English from Columbia University, where he co-edited the Columbia Review. He lives in New York City.
Posted by Get the Funk Out! at 11:20 AM