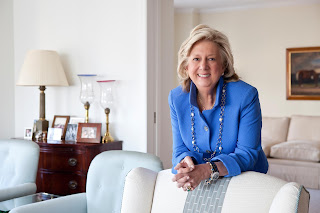 Did you miss Linda Fairstein on today's show?

New York Times bestselling crime novelist Linda Fairstein has written her first series for young readers. Into the Lion’s Den is the first in a new mystery series for young readers ages 8-12 that Publishers Weekly calls a “modern-day Nancy Drew.” Featuring a smart and plucky young detective named Devlin Quick, the series follows Devlin and her best friend Booker, as they use their wit and cunning to solve crimes across New York City with a little help from Devlin’s Police Commissioner mother.

Linda Fairstein is best known as the New York Times bestselling author of the Alex Cooper mystery series for adults. Linda worked at the Manhattan District Attorney's office as the head of the Special Victims Unit from 1976 to 2002. Devlin Quick is her first book for children. She lives in New York, NY, where the Devlin Quick series is set.

Linda Fairstein first dreamed of writing mysteries in the sixth grade. A voracious reader of Nancy Drew, Linda penned her first caper for kids, The Secret of Apple Tree Farm at the age of 11. “The books I remember most vividly—and fondly—from my childhood were Nancy Drew mysteries,” said Linda Fairstein. “My two careers in sleuthing—first in the courtroom, and then in The Alex Cooper series of crime fiction—are both the result of my affection for that smart young woman and her friends.”

In Into the Lion’s Den, twelve-year-old Devlin Quick is prepared for a quiet summer day at the New York Public Library when her friend Liza witnesses something strange: a blade falling to the floor of the rare (and expensive) books room, a book left behind with a page meticulously torn out, and a man in a serious hurry to get out of there. But he has no briefcase—nothing in his hands at all, in fact—and he doesn't appear to be hiding anything. Any other kid might shrug this off, but Devlin Quick is not any other kid, and she knows she has to bring this man to justice. But who is he? What did he steal from the library—and why? And what could the page—an old map—possibly lead to? With her wits, persistence, and the help of New York City's finest (and, okay, a little assistance from her Police Commissioner mother, too), Dev and her friends piece the clues together to uncover a mystery that's bigger than anyone expected—and more fun, too.

Linda drew inspiration for the novel from one of the first cases she prosecuted—that of a map thief—and her subsequent fascination with Forbes Smiley, one of America’s most notorious art thieves. The novel is also peppered with interesting facts about the New York City and Brooklyn public libraries and the many literary and historical treasures within their walls.

Perfect for upcoming best of November book round-ups and holiday gift guides, Into the Lion’s Den is will appeal to fans of spunky sleuths and clever capers. Linda will visit schools, bookstores and libraries this fall to discuss Devlin Quick. Go to www.lindafairstein.com for a full list of events.
Posted by Get the Funk Out! at 11:17 AM