Featuring Marcy Cravat, Director/Producer of the film ANGEL AZUL, Environmental Documentary at the Intersection of Art, Science, and the Suffering Seas, Monday 5/25 9:00am pst! 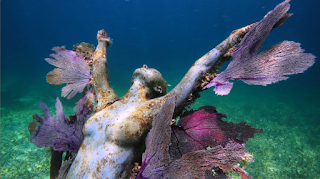 ‘ANGEL AZUL’, Environmental Documentary at the Intersection of Art, Science, and the Suffering Seas, screened at Newport Beach Film Festival.

If you missed today's show with Marcy Cravat, listen here.

Daughter of late actor Nick Cravat, circus partner, life long friend, and co-star alongside Burt Lancaster in the legendary 1940s-50s films “The Crimson Pirate” and “The Flame and the Arrow”, Cravat’s emerging career as a filmmaker follows her many years as a professional photographer, trained at the Art Center College of Design, Pasadena, California. Upon completion of film school from the Berkeley Digital Film Institute in 2010, Cravat's focus on portrait style documentaries that explore the lives of local artists such as Hayes Valley jazz singer Jacqui Naylor prompted Cravat to document British eco-sculptor Jason deCaires Taylor, who is featured in Angel Azul.

Taylor’s hauntingly beautiful artificial coral reefs are created from statues cast from human models and then installed on the ocean floor at El Museo Subacuático De Arte, an underwater museum located off the coast of the Yucatán. MUSA, the world’s first underwater museum, has been referred to as one of the top 25 Wonders of the World by National Geographic magazine and called “one of the world’s most unique travel destinations” by Forbes Magazine.


Angel Azul documents the creation of Taylor’s symbol of hope: an angel with wings made from live fan coral that flow back and forth with the tide. The film takes a turn when Taylor’s deployed statues including the “Silent Evolution” designed to raise awareness about the urgent need to address some of today’s   most pressing environmental issues, are suffocated by prolific blooms of weedy algae. Scientists such as Dr. Sylvia Earle are asked to help explain the issues surrounding coral reef demise and provide suggestions for solutions that not only impact the Mesoamerican Coral Reef where Taylor’s statues reside, but coral reefs worldwide that are dying at unprecedented rates and expected to completely disappear within our lifetimes if immediate action is not taken.


“Angel Azul” received praise at its world premiere at The Environmental Film Festival, Washington, D.C., in March 2014 as a documentary that blends art and science to deliver a powerful message: the choices we make today will determine what we leave to future generations.


“Everything connects,” says Dr, Sylvia Earle.  “Everything we do to our land, our air, our sea will be measured. Nature’s calling… are we listening?”

Trailer can be viewed here:www.angelazulthemovie.com


ANGEL AZUL
Angel Azul explores the artistic journey of Jason deCaires Taylor, an innovative artist who combines creativity with an important environmental solution; the creation of artificial coral reefs from statues he's cast from live models. When algae overtakes the reefs however, experts provide the facts about the perilous situation coral reefs currently face and solutions necessary to save them. Peter Coyote generously provides insightful narration that leaves viewers pondering our connection to this valuable and beautiful ecosystem.


LOGLINE - Through the hauntingly beautiful lure of an eco-sculptor’s underwater life-like statues we witness the birth of an artificial coral reef, learn how we are inextricably connected to the ocean and are left to consider how our choices today will determine what we leave to future generations.


TAGLINE - Casting For a New Generation. 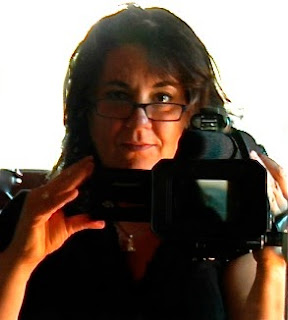 Marcelina Cravat, trained at the Art Center College of Design in photography and the Berkeley Digital Film Institute in film, and has just completed an award winning environmental documentary called Angel Azul. Making a transition from photography to film came later in life when her love for storytelling motivated her to return to school to pursue a career as a writer/director. Upon graduating, she co-founded a small production company specializing in portrait style documentaries on artists and then went on to found Passelande Pictures that serves as an umbrella for all of her projects going forward. Marcelina grew up around Hollywood sets as daughter of character actor Nick Cravat, Burt Lancaster’s life long chum, circus partner and co-star.