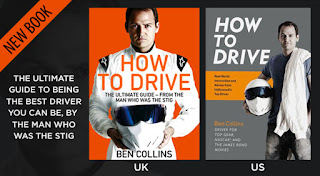 If you missed Ben Collins on today's show,
listen to our conversation here!
ABOUT BEN COLLINS


Better known as The Stig from BBC’s internationally acclaimed Top Gear TV Show. Ben coached hundreds of celebrities from Tom Cruise to Lionel Ritchie around the race-track, organised high voltage car chases and tested hundreds of priceless cars to the brink. Ben holds many credits: As a Championship Winning Le Mans Racecar Driver, Bestselling Author, TV Presenter, World Record Breaker and Hollywood Stunt Driver.
As the Stig, Ben Collins was the benchmark of speed against which all other drivers set themselves, and the man that everyone from Formula One World Champion Nigel Mansell to Jenson Button tried and failed to beat. He has raced successfully in almost every class imaginable, from Formula 3 and Le Mans 24 Hour competition to American Stock Car Racing. Jackie Stewart watching a young Ben winning a Formula 3 race, was blown away, “When you see the likes of Ben Collins in Formula One, remember you saw them here first.” It was, however, the moment Ben disguised himself in white suit and helmet, that he became instantly recognizable.
BEN'S BOOK "HOW TO DRIVE"


Each day millions of Americans engage in a very dangerous undertaking: driving. Yet, with most drivers only receiving basic training during their teen years, many could use a refresher course. And who better to lead that training than Ben Collins, former Top Gear Stig, race car driver, and the man that makes James Bond look good behind the wheel?
In How to Drive, Collins has created the ultimate guide to being the best—and safest—driver possible. It’s an absolute must for anyone with a learner’s permit and a valuable reference for those who want to be better at something they do every day. (Funny sidenote: He says women are easiest to train as they are open minded, while lots of the men feel they already know how to drive and aren't as open to learning.)
Starting with basics like pre-drive checks, braking steering and gear shifting fundamentals, to more advanced skills such as controlling skids, driving in wet or snowy conditions, avoiding accidents, and tips on how to deftly deal with worst-case scenario situations, the advice and facts in the book are culled from Collin’s twenty-year experience as one of the best drivers in the world.
Learn more about Ben Collins: http://bencollins.com/
Posted by Get the Funk Out! at 3:58 PM