Director Soren Sorensen joined me Monday at 9:30am pst to talk about his personal film, MY FATHER’S VIETNAM 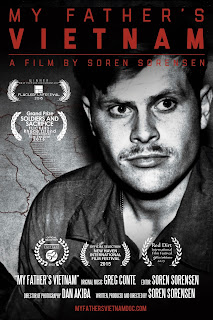 If you missed Soren Sorensen on today's show, listen here!

A personal film about a public subject, MY FATHER’S VIETNAM explores the human bonds forged and shattered by war. Set against the backdrop of never-before-seen photographs and 8mm footage of the Vietnam War, the film is the story of three soldiers, only one of whom made it home alive.

MY FATHER’S VIETNAM won the Soldiers and Sacrifice Grand Prize at the 2015 Rhode Island International Film Festival (RIIFF) and the Best Picture Documentary at the 2016 Flagler Film Festival.

The film was directed by first-time filmmaker Soren Sorensen. Gravitas Ventures will release the film on VOD and across all other digital platforms on May 24, 2016, to coincide with Memorial Day Weekend.

For additional information, go to: www.myfathersvietnamdoc.com
Posted by Get the Funk Out! at 6:51 PM