Filmmaker Claire Imler and Jackie Krisher, star of Claire's documentary Jackie Krisher: No Limits - joined me Monday at 9am pst on KUCI 88.9fm! 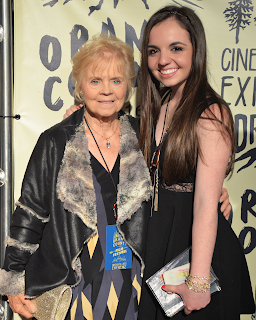 
CLAIRE TELLS US ABOUT THE FILM & HOW SHE BECAME A FILMMAKER
This film was made throughout the course of one year, my mom introduced us and then I found her story so inspiring so I decided to make a film about it. I followed Jackie’s story through all these different steps she had to take in order to be able to complete her first triathlon. I was there at her very first swim lesson, then a couple months later I was there to film her swimming in the bay during the triathlon. Jackie does all of this to raise money for the Leukemia society. She is one of the most dedicated, passionate, and hardworking person I know! She inspires many with her incredible story and I am lucky to have been able to share this experience with her! This short documentary has been nominated at several festivals, and the next upcoming screenings will be at the Newport Beach Film Festival on April 23rd, and SoCal Student Film Festival on April 30th.

A short synopsis of the film: Jackie’s inspiring story shows that there really are no limits, and that anything is possible with work, dedication, and love. She is an inspiration to many and will leave you inspired to do many great things!


ABOUT JACKIE
Jackie is filled with incredible stories, she could go on talking for hours! Currently she is 82 years old, working full time at a new job, and she trains a lot to continue running to raise awareness for the Leukemia society. Her goal is to be able to go to Africa to hike Mount Kilimanjaro to raise money.

ABOUT CLAIRE
I am a junior in high school, and I am part of the film program at school. I fell in love with film when I joined the class, and now it’s really what I want to do in my future. I’m lucky to have such supportive friends and family who help me create projects and films! I am super excited that I was nominated in several film festivals this year and I hope to be able to continue doing this in my future!