Director Gregory Caruso joins me Monday at 9:30am pst to talk about his film "Making the American Man," now available on Netflix! 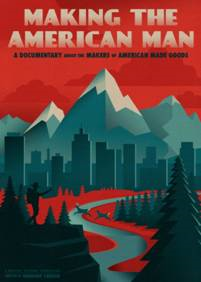 AVAILABLE EXCLUSIVELY ON NETFLIX ON JULY 1

From breakout director Gregory Caruso comes an empowering documentary about the modern age of American men’s style, the value of American-made goods—and how one cannot exist without the other.

Men’s style has changed dramatically over the past few years. MAKING THE AMERICAN MAN will grant viewers access into the creative minds of the artisans and entrepreneurs who are leading this movement.

Some of these “makers” are tried-and-true, rediscovered heritage American brands, dedicated to an unwavering tradition of union-made quality. Others are young entrepreneurs who mourn the transition to disposable, imported clothing—and so were inspired to make menswear that equaled the artisanal quality products that their parents and grandparents took for granted.

This highly anticipated film draws its power from intimate conversations with over 35 cult-cool designers and tastemakers who have defined what classic masculinity looks like today, and how they feel it must be produced. From Los Angeles to New York and everywhere in between, these cultural trendsetters shed light on the modern age of American men’s style, the value of American-made goods—and how one cannot exist without the other.


American companies and tastemakers featured in the film include:

Netflix is set to debut the world premiere of MAKING THE AMERICAN MAN on July 1, 2016. Directed by independent filmmaker Gregory Caruso, this thought-provoking documentary takes viewers on a whirlwind journey across the country and into the heart of what it really means to be “Made in the USA.”