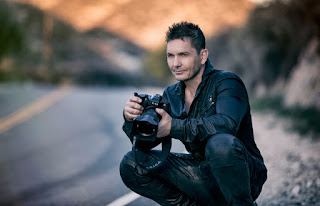 If you missed Janeane's conversation

The Director: TJ Scott is best known for his award-winning directing prowess of the hottest TV seriesonairfrom​StephenKing’s The Mist, Gotham, Bates Motel, Dark Matter, Queen of the South, Damien, Orphan Black, Bitten, 12 Monkeys,TheStrain, Spartacus, Longmire, Motive, Black Sails​ to​ Hemlock Grove ​and​ Constantine​ to name a few. The Writer: TJ is a produced writer of feature films including ​Tracers with Taylor Lautner,“​TheSecretLivesofRoadCrews​” and “​Vivaldi” ​which have been purchased by Dream Works and are now at Paramount. Chris Columbus is attached to direct “The Secret Lives of Road Crews.”

The Photographer/Cinematographer: TJ’s early career as an award winning cinematographer evolved into a passion for creating stunning  still photographic images, which was best realized with the highly successful 2014 release of his coffee tablebook“​ In the Tub​”. Jam-packed with a veritable who’s who of celebrities from the film,television,music and sports industries. Sales of this book resulted in raising hundreds of thousands of dollars for breast cancerawareness and TJ donates 100% of profits to this cause. Over 33 million​ people have viewed his photos on the internet.

TJ has been published in and on the cover of dozens of magazines, captured over 250 pages of Editorial and Fashion spreads,as well as Book Covers and Album Covers for Bands.

Currently TJ is directing Antoine Fuqua’s ICE in Vancouver, then travels to NYC for the next episode ofGothamandafterthat- New Mexico for Longmire.


Top prime-time director TJ Scott who is currently directing Antoine Fuqua’s ICE; just wrapped Stephen King’s “The Mist” and has both “Gotham” and “Longmire” up next… (not to mention Bate’s Motel, Queen of the South, Dark Matter, Orphan Black, Damien, Black Sails, Spartacus: War of the Damned) and his business partner, Dennys Ilic - a world renowned celebrity photographer/stills photographer (credits include Lord of the Rings, Battlestar Galactica - subjects such as Harrison Ford, Harry Potter himself - Daniel Radcliffe, LOTR stars Viggo Mortensen, Liv Tyler and Karl Urban…) - have launched Cinematic Pictures Group. A multifaceted entertainment company, CPG has launched CPG Music (Record Label); CPG Publishing (the ‘new’ Taschen - with four coffee table books on the way); CPG Productions (with a television series - Purgatory and multiple projects in development) — all housed in the brick-and-mortar CPG Gallery - a stunning goth, rock styled art gallery located on the 2nd floor of the Hollywood & Highland Complex - in Hollywood, CA. The gallery which showcases the stunning pictorial works of both founders - CPG Photo, is also a working studio and most days of the week is housing a movie, television, music or fashion shoot.
Posted by Get the Funk Out! at 2:17 PM