Tune in September 7th at 9:00am pst to hear Janeane speak with author Alka Joshi about her debut novel and Reese Witherspoon Book Club Pick - THE HENNA ARTIST 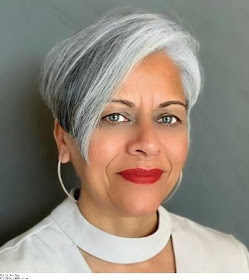 THE HENNA ARTIST  by Alka Joshi 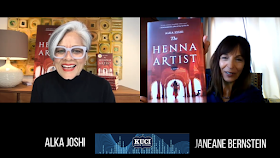 “An uplifting tale that highlights the power of family.”—LIBRARY JOURNAL

“Joshi has constructed a bewitching glimpse into the not-so-distant past with a tough heroine well worth cheering on.”—BOOKLIST

“Joshi’s prose is rhythmic and alluring, and her characters are multidimensional and alive. This is a novel of hope, ambition and healing.” —BOOKPAGE (STARRED review)


A touching tribute to the life her mother didn’t have the opportunity to lead, Alka Joshi’s debut novel, THE HENNA ARTIST (MIRA Books; March 3, 2020; $26.99) is set in post-Raj 1950s Jaipur, about a young woman struggling to shape her own destiny in a world pivoting between the traditional and the modern. With her novel, Alka reimagines what life might have been like if her mother hadn’t been in an arranged marriage at 18 and instead been able to pursue the same independence and education that she always advocated for Alka.

After fleeing an arranged marriage as a fifteen-year-old to an abusive older man, Lakshmi Shastri steals away alone from her rural village to Jaipur. Against all odds, she carves out a living for herself as a henna artist, friend, and confidante to wealthy, upper caste women. She shares her knowledge and keeps their secrets in a delicate balancing act amid the changing 1950s social mores brought about by Indian Independence. But on the day her ex-husband arrives in town, all that Lakshmi has built threatens to unravel. He seeks money and brings with him a girl, a sister Lakshmi never knew she had and suddenly the caution that Lakshmi has carefully cultivated is threatened, along with her livelihood. Still she perseveres, applying her talents and lifting up those that surround her as she does.

Alka Joshi is a graduate of Stanford University and received her M.F.A. from the California College of the Arts. She has worked as an advertising copywriter, a marketing consultant, and an illustrator. Alka was born in India, in the state of Rajasthan. Her family came to the United States when she was nine, and she now lives on California's Monterey Peninsula with her husband and two misbehaving pups. The Henna Artist is her first novel.


Photo: My mother, Sudha Latika Joshi, 1955, the year of her marriage


My father tells this story. When I was five, my father’s mother – spooned more subji and chapatti onto my brothers’ plates than on mine. My mother stopped her. “In my house,” she said, “my daughter is equal to my sons.”


My mother – always – was my champion. She, who had an arranged marriage at 18 and three children by the age of 22, never had the choices she wanted me to have: whom to marry, when to marry, whether to have children, what to study, what to do with my life.

I began to imagine a different life for her. What if she had been allowed to complete her B.A. before she married? What career would she have pursued? What if she had raised her children in India, and not in America – a country whose language it took her 30 years to master?


THE HENNA ARTIST is the life I imagined my mother might have lived. Lakshmi, like my mother, has blue-green eyes, lustrous hair and a creative spark. Unlike my mother, Lakshmi flees her marriage and reinvents herself as a henna artist in Jaipur, Rajasthan’s capital, during the heady years just after India’s independence. She defies convention. She clings fiercely to a life of her own making.


It took ten years – and a great deal of research – to write THE HENNA ARTIST. I quizzed my father and mother endlessly about the era following the British Raj (both my parents were born in the 1930s and married in 1955). I read about India’s medicinal plants, ayurvedic and aromatherapy remedies, the history of henna – how it’s made and why it’s so important in Indian culture – the British in Rajasthan, the education of girls in that era, the caste system, and how it affected the lives of those defined by it.


I traveled several times – from 2009 to 2011 – and more recently, this past February, to Jaipur, where I interviewed Rajput families, shopkeepers in the Pink City, women my age and their urban daughters, teachers at the Maharani Gayatri Devi School for Girls, ayurvedic doctors, and, of course, henna artists. I spoke at schools and colleges, asked questions, danced at glorious weddings, and drank copious cups of chai.


Although my mother did not live long enough to see the novel published, she lives in every breath Lakshmi takes and every word she utters.


Through Lakshmi, my mother revels in a world of choices she never had in life.
Get the Funk Out! at 3:00 AM
Share
‹
›
Home
View web version