Monday May 16th at 9:00am - THE CANDY HOUSE by American Pulitzer Prize-winner Jennifer Egan - NAMED A MOST ANTICIPATED BOOK OF 2022 BY VULTURE, BUZZFEED, TIME, ENTERTAINMENT WEEKLY, VOGUE, AND MANY OTHERS 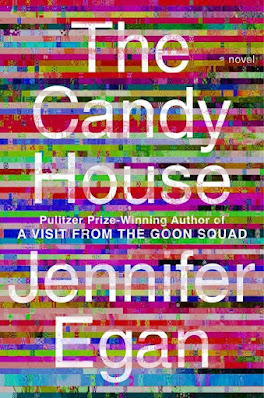 “A thrilling, endlessly stimulating work that demands to be read and reread.”
—Kirkus Reviews, STARRED review
LISTEN
Jennifer Egan’s bravura and brilliant new novel, THE CANDY HOUSE, a sibling novel to her Pulitzer Prize-winning A Visit from the Goon Squad, has just been published to rave reviews and massive attention, including profiles in Vogue, Time, and the Los Angeles Times and rave review in The New York Times and The New York Times Book Review.

THE CANDY HOUSE is a very smart novel asks big questions about the totalizing and flattening effects of digital culture, privacy, and surveillance – while also being a huge pleasure to read. It is one of this spring’s most hotly anticipated novels.Vogue’s recent profile of Jennifer Egan can be found here: https://www.vogue.com/article/jennifer-egan-profile

Scribner is thrilled to announce the publication, on April 5, 2022, of Jennifer Egan’s new novel, THE CANDY HOUSE. A sibling novel to her Pulitzer-Prize and National Book Critics Circle-winning A Visit from The Goon Squad, THE CANDY HOUSE is a triumph of imagination and empathy and every bit as bravura, brilliant, and exhilarating as its predecessor.

Spanning decades, with an intricate plot and interconnected characters, THE CANDY HOUSE is that rare thing: a book that is both pure pleasure on the sentence level and wildly ambitious in scope. In these pages we meet a tech billionaire who ushers in a new age of enhanced digital sharing, the anthropologist who unwittingly enabled this new era, “eluders” who seek to retain privacy and discretion in the face of the onslaught, and the “proxies” who impersonate them, plus record producers, aging rock stars and movie stars, spies, publicists, writers, academics, mothers, fathers, and children. Set in San Francisco, New York City, suburban country clubs, a beatnik forest enclave, the desert, and the mysterious nation of X, with entwined characters and plot points that overlap with A Visit from the Goon Squad, this is a dazzling achievement.

In THE CANDY HOUSE, Egan does in a few pages what it takes other writers a whole novel to accomplish, and she does it again and again. She can infuse everything from a suburban little league game to a cubicle in a tech office with mystery, meaning and purpose. And while this novel asks big questions about the totalizing and flattening effects of digital culture, privacy, and surveillance, its strengths are also in the narrative, in the intimacy of the relationships between the characters, in its humor and joy, and in its many forms of love. This remarkable novel is, in the end, a huge pleasure to read.

Praise for THE CANDY HOUSE:

“Does what only the best and rarest books can: peel back the thin membrane of ordinary life and find transcendence on the other side.”


“Inventive, effervescent…Egan’s prose is as lithe and knowing as ever…in these intricately woven pages.”


“A marvel of a novel that testifies to the surpassing power of fiction.”


“Radiant…exhilarating…Egan opens windows on entrancing new worlds, in which what happened depends on who’s telling the story.”


“This is minimalist maximalism. It’s as if Egan compressed a big 19th-century triple-decker novel onto a flash drive.”


“The pleasure is in watching the details. Every little nuance works.”


“Egan is a one-woman R&D department of language."


“Fiction at its best gets at our…secret selves in ways the internet can’t…Egan’s audacity is welcome.”


EW “Another multi-narrator masterpiece about searching for meaning in a crazy world.”


VOGUE: “A dazzling feat of literary construction that belies the profound questions at its core: Does technology aid our sense of narrative or obscure it?”


GOOD HOUSEKEEPING “You don't have to read A Visit From the Goon Squad to love this sibling novel to Egan's stellar hit…complex and intimate.”


OPRAH DAILY “Inventive, effervescent…Egan plaits multiple narratives and techniques to underscore the manifold ways our own desires betray us in a brave new coded world.”


USA TODAY “Tech guru Bix Bouton creates ‘Own Your Unconscious,’ a technology that allows users to access and share every memory they’ve ever had. It’s a concept so killer, it’s hard to believe such technology doesn’t already exist.”

Jennifer Egan is the author of six previous books of fiction: Manhattan Beach, winner of the Andrew Carnegie Medal for Excellence in Fiction; A Visit from the Goon Squad, which won the Pulitzer Prize and the National Book Critics Circle Award; The Keep; the story collection Emerald City; Look at Me, a National Book Award Finalist; and The Invisible Circus. Her work has appeared in The New Yorker, Harper’s Magazine, Granta, McSweeney’s, and The New York Times Magazine. Her website is JenniferEgan.com.
Posted by Get the Funk Out! at 10:00 AM