11/7 at 9:00am pst LIVE on KUCI 88.9fm - One of the youngest survivors of Auschwitz-Birkenau tells her remarkable story--Tova Friedman's THE DAUGHTER OF AUSCHWITZ 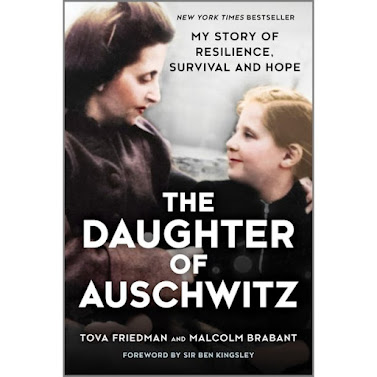 THE DAUGHTER OF AUSCHWITZ
My Story of Resilience, Survival and Hope
by Tova Friedman and
Malcolm Brabant
LISTEN

A powerful memoir by one of the youngest survivors of Auschwitz, Tova Friedman, following her childhood growing up during the Holocaust and surviving a string of near-death experiences in a Jewish ghetto, a Nazi labor camp, and Auschwitz.

"I am a survivor. That comes with a survivor's obligation to represent one and a half million Jewish children murdered by the Nazis. They cannot speak. So I must speak on their behalf."

Tova Friedman was one of the youngest people to emerge from Auschwitz. After surviving the liquidation of the Jewish ghetto in Central Poland where she lived as a toddler, Tova was four when she and her parents were sent to a Nazi labour camp, and almost six when she and her mother were forced into a packed cattle truck and sent to Auschwitz II, also known as the Birkenau extermination camp, while her father was transported to Dachau.

During six months of incarceration in Birkenau, Tova witnessed atrocities that she could never forget, and experienced numerous escapes from death. She is one of a handful of Jews to have entered a gas chamber and lived to tell the tale.

As Nazi killing squads roamed Birkenau before abandoning the camp in January 1945, Tova and her mother hid among corpses. After being liberated by the Russians they made their way back to their hometown in Poland. Eventually Tova's father tracked them down and the family was reunited.

In The Daughter of Auschwitz, Tova immortalizes what she saw, to keep the story of the Holocaust alive, at a time when it's in danger of fading from memory. She has used those memories that have shaped her life to honor the victims. Written with award-winning former war reporter Malcolm Brabant, this is an extremely important book. Brabant's meticulous research has helped Tova recall her experiences in searing detail. Together they have painstakingly recreated Tova's extraordinary story about the world's worst ever crime.

Tova Friedman is eighty-four years old and lives in New Jersey, USA. She is one of the youngest survivors of Auschwitz and uses her vivid memories to write and speak against anti-Semitism and prejudice. She was the director of a nonprofit social service agency for twenty-five years and continues to work as a therapist.

Malcolm Brabant is a veteran, award-winning veteran foreign correspondent. Brabant has reported from over 80 countries.

Praise for THE DAUGHTER OF AUSCHWITZ

" Enriched by Friedman’s earnest reckonings with her trauma and hard-won sense of optimism, this is a poignant testament to survival and faith."

“I read this book with gratitude and urgency. Gratitude for the courage Tova Friedman has shown in deciding to share her story. We are all the beneficiaries of such powerful witness. The urgency comes from the knowledge that as time marches on such vivid voices are becoming increasingly rare. Read this book, cherish the lessons. It is a book rooted in the terrible events of another time, but the truths it reveals are eternal.”

–Fergal Keane, author of Wounds: A Memoir of War & Love


"An unforgettable and deeply moving story. Malcolm Brabant brilliantly evokes the world of the ghetto and of Auschwitz through the eyes of Tova Friedman, a small child who survived the brutality of the Holocaust."

–Jeremy Bowen, author of Six Days: How the 1967 War Shaped the Middle East

“[A] heartrending, lyrical account of a young girl’s survival during the Holocaust.”

THE DAUGHTER OF AUSCHWITZ
My Story of Resilience, Survival and Hope
by Tova Friedman and Malcolm Brabant
Hanover Square Press
September 6, 2022
Posted by Get the Funk Out! at 7:12 AM