Award-winning filmmaker and director Varda Bar-Kar joined me Monday at 9:30am pst! 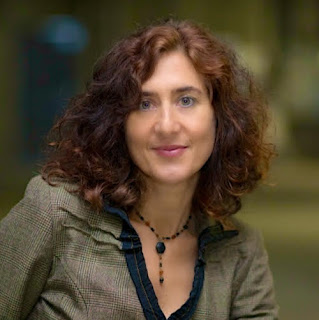 If you missed Varda Bar-Kar
on today's show, listen here! 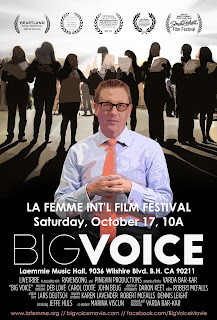 BEVERLY HILLS, CA –BIG VOICE the new musical feature documentary that follows a year in the life of a demanding high school choir teacher who pushes his students to become “one big voice," will make it's hometown festival debut at the 11th Annual LA Femme International Film Festival on Saturday, October 17 at 10 am at the Laemmle Music Hall Theater in Beverly Hills. (The official World Premiere will be the following day at the Heartland Film Festival.)

BIG VOICE, directed by award-winning filmmaker Varda Bar-Kar, chronicles a year in the life of Santa Monica High School choir director Jeffe Huls striving to create his dream ensemble. Following a series of competitive auditions, Mr. Huls assembles what seems to be the most ideal combination of voices he’s ever had - but he soon discovers that these 32 talented teenagers are also the most unwieldy group he has ever taught. Mr. Huls must convince his students to set aside their egos, conflicting styles, and teenage angst to achieve the artistry he knows they are capable of.

When Varda Bar-Kar first attended Samohi’s Winter Concert she was moved to tears by the beauty of the choir’s voice. “I wanted to find out how Mr. Huls did it. And I realized that BIG VOICE could be an opportunity to tell the story of a dedicated teacher who makes a profound difference in his students’ lives and to reveal how valuable arts education can be,” said Bar-Kar.

More information on Big Voice can be found on the BIG VOICE facebook page (www.facebook.com/BigVoiceMovie), YouTube (www.youtube.com/user/bigvoicemovie) and the official film website at http://bigvoicemovie.com. The trailer can be seen at www.youtube.com/watch?v=HkhdUU-a1II.

Tickets can be purchased at www.lafemme.org/tickets or prior to the screening at the Laemmle Music Hall located at 9038 Wilshire Blvd. in Beverly Hills.

For more information on the LA Femme International Film Festival screening or to arrange interview with the director and stars, please contact Deborah Gilels, LA Media Consultants, at 818-758-6509.