Rachel Reenstra, actress, comedian, and host of the Emmy nominated ABC TV show “The Wildlife Docs" joined me Monday at 9:30am pst!

Did you miss Rachel Reenstra
on today's show? Listen here!

Some people try to do it all. Others actually do. One such person who manages to do so is the multi-talented Rachel Reenstra, who has thrived in a number of creative outlets including acting, television hosting, stand-up comedy, and voice-over performances. What sets her apart from her counterparts is her instinctiveness and unwavering tenacity to achieve her goals. Early on in her acting career her drive even earned her a guest starring role on the Tea Leoni led sitcom “The Naked Truth” despite being told her appearance was too similar to that of the lead actress. That didn’t stop her from convincing one of the writers to search for a creative mechanism to work her into the show. 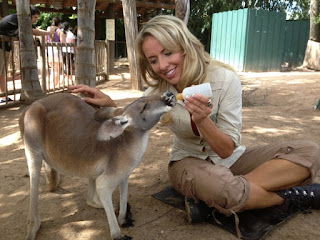 It’s this type of spark that has defined Reenstra’s career and it’s apparent the word “no” doesn’t operate in her vocabulary. Her ability to seamlessly transition from one type of performance to another is nothing short of brilliant. Television acting is one thing, but tackling the emergence of voice-over acting in video games is an entirely different beast. She voiced Eva in “Grim Fandango,” an adventure-noir game by LucasArts that conquered new terrain in computer graphics, received universal critical acclaim, and even claimed several awards after its release, including Best Adventure Game of the Year by IGN. Reenstra continued her work with LucasArts by appearing in the Star Wars video games, “X-Wing Alliance” and “Battlefront II.”

And while it’d be easy to continue on with Reenstra’s success in acting, that’d be criminally selling her achievements short. She’d be the first to tell you how difficult Hollywood can be and how taxing the daily rejection gets for an aspiring artist. But while some would be quick to list the hurdles that stand between them and their goals, she’s determined to create her own destiny. After years of television shows, video games, and stand-up comedy she envisioned her real future and realized what she truly wanted to do was “host a show where I traveled the world.” She would get that chance soon enough.

With her idealized life taking shape in her mind, Reenstra used her life savings and began traveling around the world documenting everything she did, placing a large emphasis on the animals and wildlife she crossed paths with. Her lucky break would come soon after when she learned that Animal Planet was searching for their next great adventure host for a television show on their network. It became easy for her to connect the dots and see the perfect opportunity in front of her. Using clips from her travels she produced and edited her audition tape, sent it off to Animal Planet, and was soon announced as the new host of “Ms. Adventure.”

Reenstra calls herself lucky, but there’s more than luck involved when a talent is paired with the perfect project. It’s fate. She’s called “Ms. Adventure” her dream job and why wouldn’t it be? A large portion of it as host was for her to point out and provide commentary on the similarities and differences between animals and humans. A subject she says is ripe with comedy. Reenstra was able to combine her deep love of animals, quick-fire wit, and astute observational humor to thrive as the show’s host.

Television hosting seemed to be a natural calling for Reenstra, as she followed up “Ms. Adventure” by hosting HGTV’s “Designed to Sell” during 2008, where she continued to satisfy audience interests and curiosities. Later in 2013, she would experience another career breakthrough when she became the host of ABC- TV’s Emmy Nominated series “The Wildlife Docs,” a documentary show chronicling the fascinating lives of the veterinarians at Busch Gardens in Tampa, Florida. The program gives viewers a behind the scenes look at everything they don’t get to see at the popular tourist attractions and Reenstra is their dependable guide through it all.

Reenstra comes from a family of missionary doctors and nurses who spent their lives setting up hospitals and caring for the sick in underprivileged countries. Her family was a huge influence on her life and her childhood has direct connections to how her career would later take shape. By age seven, Reenstra had already traveled the world. She was surrounded by wildlife at a young age, which provided her with the passion for animals she would later utilize as an adventure host. Along with that, Reenstra was inspired by her mother’s groundbreaking radio show “Interfaith Dialogue,” a program that connected religions together and one that would be a dominant factor in Reenstra earning her Master’s in Spiritual Psychology. Her mother showed her that blazing your own path can be accomplished and encouraged her to follow whatever she dreamed of doing. Finally, Reenstra has said that her father was a charmingly goofy man, and making him laugh was a sublime accomplishment. This continuous challenge forced her to hone her comedic sensibilities and engrained in her the desire to make people laugh.

All of these examples prove that Reenstra’s upbringing directly prepared her for the diverse career she would later enjoy. And while her current show “The Wildlife Docs” allows her an outlet to share her interest in wildlife conservation with a broad audience, she isn’t just stopping there. She’s committed herself to being a part of the movement. Reenstra is on the board of directors on the NSEFU Wildlife Conservation Foundation, which is dedicated to preserving and protecting imperiled species in Southern Africa. She understands the importance of humans and animals co-existing and hopes to use her educating ability to foster real change in the anti-poaching movements. Recently, she hosted segments on TV’s “The Insider” where she educated on the shift in culture around big game hunting, and the impact Cecil the Lion has had on the mainstream.

Never one to rest, Reenstra has explored other facets of her skill set, using what she’s learned over her career to help others make their dreams come true too. It’s undeniably apparent that she wants to help enrich the lives of people she meets. Whether that’s through her acclaimed E-book Get Lucky, her blog Love Your Wildlife, classes where she teaches hosting techniques, or her willingness to step out and protect the animals we share this planet with. She’s doing what she always wanted to do: forging her own path and showing the world how much she has to offer. She embraces challenges and is always searching for the best way to make an impact. Nothing will stop her from creating her own destiny and that’s what makes her so captivating. Reenstra has stated that when people hear her name she wants them to think of comedy and animals. It’s difficult not to think of so much more, though.

Here's a clip from 20/20 PIECE FEATURING HOW RACHEL CREATED HER GOOD LUCK AND CREATED HER DREAM JOB! https://youtu.be/CvYfsIJKsO8