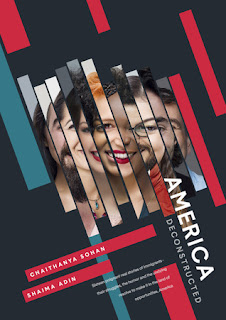 ABOUT
Naseer was nine years old when he escaped Taliban and fled Afghanistan with his mom and siblings. His story, “There are some people who are coming to take me away”, chronicles the resilience of a nine year old boy as he traveled from Afghanistan to America in his quest for the American dream. “I saw a ripe mango I’d like to pluck” showcases the love story of Chidiebere and Ifeyinwa, which begins in rustic Nigeria and culminates into a life in America. Their journey chronicles their struggles with language, culture and being African in America. In the story “ Kosovo, really...cool”, Lisian takes us through his journey to America and often being asked his identity in spite of being white. In the story “I am exotic, mocha, P-diddy”, Parag describes his journey from a young sixth grader who hid his attraction to boys in conservative India to embracing his sexuality in America. America Deconstructed follows the journeys of sixteen immigrants who have left their home countries in search of the American dream. The stories combine humor and emotions as the protagonists maneuver cultural differences, accents and uncomfortable situations while feeling a sense of belonging in America.


An Interview with CHAITHANYA SOHAN


1. The people featured in the book come from all walks of life and countries all over
the world. Were you ever surprised by the stories your contributors had to share?

What do you say when you hear someone who is your age talk about selling potatoes and egg at the school yard. I had seen these stories in old Bollywood movies, but never knew someone my age could be living that life while my biggest hurdle was getting a certain grade, or not getting my chocolate for the week. I have been surprised, had my jaw drop in complete disbelief and humbled that I was fortunate to live the life I did in India.

2. In your experience, what is something that makes the cultural transition to America
easier? Harder?

I think the American experience is a very personal journey and differs from one to the other. For me personally, everyday intricacies were challenging. Dating, going to get coffee, ordering food at the restaurant, etc were challenging. It took me about two years to sort of learn the ropes of American life. The easiest in terms of my transition was fashion, language and food.

3. What inspired you to pull together these stories? Were the contributors friends
before starting the book?

As a teenager in America, I always thought my journey was unique. Nobody talked about  he everyday challenges one faced. I thought I was unique in not knowing what a frappuccino or cappuccino was at Starbucks. It was when I met Shaima in college that I realized Starbucks might have been my sore spot but it was not unique. I always wanted to write a book, and I researched to see if there was a book like this. I then approached
Shaima with the idea, and America Deconstructed was born. Well between the both of us, we knew most of the contributors. Some were friends, friends of family, and coworkers. We wanted diversity in the book, and we approached few people online, expats, bloggers etc to get the diversity we wanted in this book. It was extremely hard to find Caucasians immigrants.


4. A major theme in the book is acclimating to American culture and creating a new
identity in a foreign environment. What can you tell us about this idea of identity
and belonging?

I have always struggled with the sense of belonging in America. As someone who is born
and raised in India, my identity is pretty strong. I don’t see myself as an Indian-American as even my mom does a lot of times. I still identify myself as Indian. Belonging has been a challenge. As someone who still has strong emotional ties to India, and a certified mush ball, I have struggled with the notion of belonging and feeling at home in America. In 2009, I went back to India for the first time since I immigrated to America. As soon as I reached India, I felt the sense of belonging that had always evaded me in America. I feel like I am home when I go back to India and I crave that feeling when I am here. I always thought it was unique to me, but then I interviewed someone from Ghana who had come here when he was younger than I was, and yet the conflicts of belonging was as strong in him as it was in me. I knew then I wasn’t an unicorn.


5. What advice would you give to new immigrants who are chasing the American Dream?

The American Dream is a slow grind. It takes time and patience. Something as simple as
dressing in an American acceptable way can be a slow process. As a tomboy, I used to dress in baggy jeans and big shirts back in India. It took me two years to dress in a mainstream acceptable way. It took two years for my jeans to get tighter and for my big baggy shirt to morph into fashionable tops. It was a slow and gradual process. American
Dream can be different for different people. For a young person in college, it could be
being accepted.

6. You refer to your surroundings as “cultural mix-masala.” How do you mix your own culture, your husband’s culture, and California culture?
I think this question is for my husband because he lives in a predominately Indian household with my Indian parents. On a serious note, we have been very open, accepting and respectful of each other’s cultures which has made the journey fun. We have formed our own subculture I think which is why I call it a cultural mix-masala. We indianize everything - chilli powder and spices are a staple in every cuisine we make at home.

We have strived to take the good in all the cultures and make our own. It has been a normal
all my life. As the granddaughter of an Anglo-Indian woman (British ancestry), I grew up
in a multicultural household that probably wasn’t the typical Indian family. We have always had our own culture which made assimilating and making our culture in America
easy and less daunting.


7. Your career has been focused on electrical engineering -- how did you get into
writing?

Electrical Engineering is my bread and butter, writing is chicken soup to my soul if that explains it. As a child, my dad and I would write letters to each other when we had our arguments. He would then critique the letter for grammatical errors. This is how I learned how to write. Years later, writing found me when I did not know how to move on after a
tragedy. I began writing poems which one my teachers found in my book, and word spread around my school. I started hosting shows in school, writing for the school magazine, etc. I started freelancing when I came to America and eventually decided to write a book when I started thinking about becoming more professional in the space.

8. Why do you think it is important for people to hear these firsthand accounts?

These journeys need to be told especially in the political climate today. We always think about immigrants in terms of legal and illegal. We are not condoning illegal immigration in any way. We are trying to show the journeys of the people who call America home.

We always think one can reach America and life is all good. It is not always the case.
There is a assimilation period, learning a new language,etc that can be very funny yet
challenging. Something as simple as a coffee run can be a daunting task.

9. What are you hoping readers take away from these stories?

I am hoping readers can take the book for what it is - a montage of the journeys of people
who immigrated to America. I hope they can read the book outside of judgement, laugh,
cry and just enjoy the stories for what they are. On a serious note, I am hoping people can
become more tolerant the next time they see someone struggle with conversational
English or taking time ordering at a restaurant.

Chaithanya Sohan immigrated to the U.S. from India in 2001. She received a bachelor’s in
electrical engineering from San Jose State University and a master’s from Santa Clara

University, and now works in Silicon Valley. She began writing for various websites in 2002 and decided to pen “America Deconstructed” in 2013. She has also authored pieces on political issues for One Earth One Mission and www.rethinkreality.com. She enjoys traveling and runs www.nomadicsue.wordpress.com and www.wordspeare.wordpress.com. She and her husband, Denell Hopkins, live in Newark, California, with their daughter, Maya, puppy Zed and her parents.

Shaima Adin came to the United States as a refugee in May 2000 at 16 with her mother and
sisters. She is originally from Afghanistan but lived in Pakistan as a refugee for several years. Currently, she works in an engineering management at a testing laboratory in Union City, California. Shaima and her husband Naseer are first generation immigrants and refugees who made the American dream a reality by creating a comfortable life for themselves in the U.S.