"[Geiger] will be on the Mount Rushmore of witty writers, next to David Sedaris, Mike Birbiglia, Dave Barry and Nick Hornsby." - Mel C. Miskimen, author of "Sit Stay Heal" 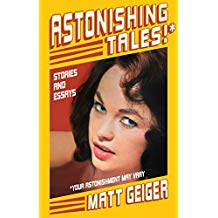 *Your astonishment may vary


“Matt Geiger is definitely interested in strange things—bearded Norwegian axes and transubstantiation and elderly models, for example—but also in making ordinary things seem strange, in the best possible way. It's just chickens or a car seat, but you're laughing out loud and then, suddenly, your eyes are filling with tears because he's sideswiped you with his profound tenderness. I wish he were my friend IRL (as the kids say), but in the meantime, I'll reread these funny, shimmering musings on everything that matters and more.”

Author and humorist Matt Geiger believes Jorge Luis Borges when he says the thing philosophers really seek, more than truth, more even than knowledge, is the opportunity to be amazed. With this as his starting point in his new collection of stories and essays, Geiger sets out in search of comic profundity and awe.

Geiger turns what poet Kimberly Blaeser called his “philosopher’s vision” to his own Neanderthal DNA, parenting, competitive axe throwing, death, the holidays, dandelions, doppelgangers and much, much more. With a nod to the limits of human knowledge and understanding, particularly his own, he blends whimsy and gravitas while unveiling beauty, joy, and happiness in a seemingly broken world. From the 83-year-old model whose image adorns the cover of the book, to the two-headed calf he discovers in a rural gas station, he finds reason after reason to smile, nod, and be astonished by everyday life.


In his new collection of stories, acclaimed author and humorist Matt Geiger seeks to “de-familiarize” us from the world, from the smallest detail to the most cosmic mythology, in order to see it all as if for the first time. Turning his “philosopher’s vision” to his own abundant Neanderthal DNA, parenting, competitive axe throwing, old age, and much more, he sets out in search of comic profundity. With a nod to the limits of human knowledge and understanding, particularly his own, he draws from the wisdom of an 83-year-old pin-up legend, Anton Chekhov, Santa Claus, modern boxers, Medieval monks, and of course small children. Blending whimsy and gravitas, he unveils beauty, joy, and happiness in a seemingly broken world.


About the author: Matt Geiger is a Midwest Book Award Winner, a national American Book Fest Finalist, and an international Next Generation Indie Book Award Finalist. He is also the winner of numerous journalism awards and is regularly heard on public radio and New York Times bestselling author Jennifer Chiaverini called Geiger "a writer of deft humor and exceptional insight. By turns poignant and hilarious, his witty, empathetic observations of fatherhood, family, and community evoke laughter and touch the heart in equal measure." Geiger’s stories have been praised by the Pioneer Press, the Capital Times, the Midwest Book Review, the St. Augustine Record, Writers on Writing, Curled Up With A Good Book, and many others. His writing has also been lauded by authors including Kirsten Lobe, Alex Bledsoe, and bestselling novelist Kathleen Ernst, who said his stories have “universal appeal”: “Matt Geiger delves into the heart of common experience with wit, humility, and vivid detail.”

Language: English
Posted by Get the Funk Out! at 4:22 PM