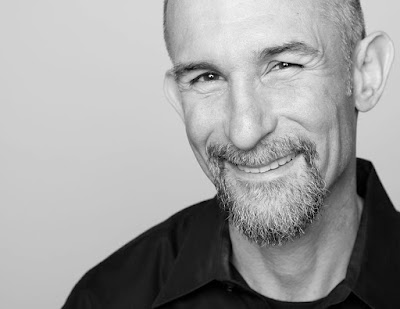 Leader Emeritus at The ManKind Project

Creator at WE ARE ALL HOMELESS


Willie Baronet was the owner and creative director of GroupBaronet (now MasonBaronet) from 1992-2006. His design and advertising work has been featured in Communication Arts, Graphis, AIGA, New York Art Directors, The One Show, Print Casebooks, Annual Report Trends, The Type Directors Club and Annual Report Design: A Historical Retrospective 1510-1990, organized by the Cooper-Hewitt National Museum of Design. In 2013 he was given the AIGA Fellow award, the highest honor an AIGA chapter can bestow upon one of its members. He has spoken to various business and creative organizations over the years, including TEDxSMU, and has judged many creative competitions including the prestigious Communication Arts Annual.

Willie graduated with an MFA in Arts and Technology from UTD in 2011. His art has been featured in a number of group exhibitions including “Art as a Medium for Action” at Hoxton Arches, London and Pembroke College, Cambridge, “Truth to Power” in Philadelphia in conjunction with the Democratic National Convention (which also featured Banksy, Ron English and Shepard Fairey among others), the 15th Annual “No Dead Artists” at the Jonathan Ferrara Gallery in New Orleans, LA, “INVASIONEN/ INVASIONS” at the Galerie Carolyn Heinz in Hamburg, Germany, and the “500XPO 2012” at 500X in Dallas. He has also had a number of solo exhibitions across the U.S., and is currently a member of the art collectives “In Cooperation With Muscle Nation” and “CircleWerk.”

Willie has been buying and collecting homeless signs since 1993 as part of a long term art project titled "WE ARE ALL HOMELESS." In 2014 he began a 31-day cross country trip to buy signs in 24 cities, which was the subject of the documentary Signs of Humanity, which premiered at the Dallas International Film Festival and has been accepted into 7 additional festivals. The project has been featured in dozens of international and local media, including Yahoo! News, NPR - All Things Considered, The Huffington Post, Al Jazeera America and Fast Company’s blog, posted by Katie Couric. An UpWorthy video about the project that was uploaded on August 31, 2015 has been viewed over 6.4 million times.

Willie is a 1982 graduate of the University of Southwestern Louisiana. He has taught advertising design at Brookhaven Community College, Texas A&M at Commerce, TCU, and has served as visiting faculty for the MA Program at Syracuse University. Willie is currently the Stan Richards Professor in Creative Advertising at SMU's Temerlin Advertising Institute, where he teaches classes related to creativity and portfolio development. 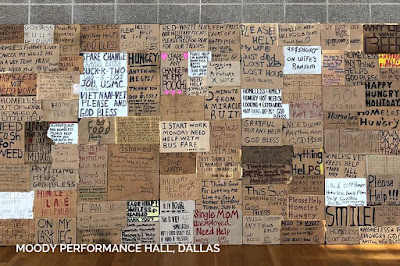 ABOUT THE WE ARE ALL HOMELESS PROJECT

The WE ARE ALL HOMELESS project began in 1993 due to the awkwardness I felt when I’d pull up to an intersection and encounter a person holding a sign, asking for help. Like many, I wrestled with whether or not I was doing good by giving them money. Mostly I struggled with my moral obligations, and how my own choices contributed in conscious or unconscious ways to the poverty I was witnessing. I struggled with the unfairness of the lives people are born into, the physical, mental and psychological handicaps. In my struggle, I avoided eye contact with those on the street, unwilling to really see them, and in doing so avoided seeing parts of myself.

That began to change once I began asking them if they would sell their signs. My relationship to the homeless has been powerfully and permanently altered. The conversations and connections have left an indelible mark on my heart. I still wrestle with personal questions regarding generosity, goodness, compassion, and guilt. And what it means to be homeless: practically, spiritually, emotionally? Is home a physical place, a building, a structure, a house? Or is it a state of being, a sense of safety, of being provided for, of identity? I see these signs as signposts of my own journey, inward and outward, of reconciling my own life with my judgments about those experiencing homelessness. 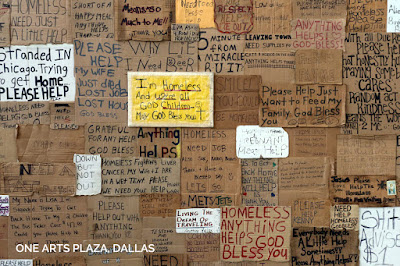 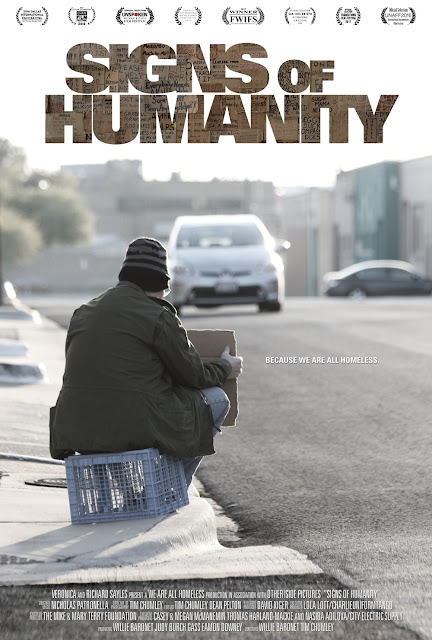 SIGNS OF HUMANITY
SIGNS OF HUMANITY is a documentary film that explores inter-related themes of home, homelessness, compassion, and humanity. Artist and professor Willie Baronet has purchased more than 1,800 homeless signs since 1993, and he uses this collection to create installations to raise awareness about homelessness. During the month of July, 2014, Willie and three filmmakers drove across the country, interviewing more than 100 people on the streets and purchasing over 280 signs. SIGNS OF HUMANITY is a film about that trip. Click here for more information.

WE ARE ALL HOMELESS has been featured in media all over the world including NPR, HuffPost, Yahoo! News, Buzzfeed and dozens of others. In one month (during the filming of the documentary Signs of Humanity) it had over 138 million media impressions, was on the front page of Reddit, and an article picked up by the Associated Press was featured in media all across the United States.

SIGNS OF HUMANITY is available to view free on Amazon Prime Video, and can be purchased or rented without a Prime account. Click the link to view.

Willie Baronet: Willie@WeAreAllHomeless.org
Posted by Get the Funk Out! at 12:44 PM