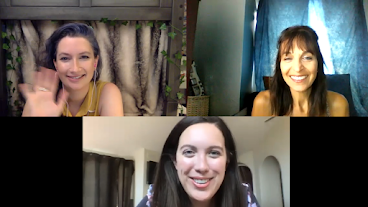 LOS ANGELES - September 9, 2020 --  “The Influencers,” a sharply drawn yet humorous look at the world of YouTube celebrities and their hapless agents, has morphed from a pilot into a sleeper hit at indie festivals across the country. The pilot will screen at the Catalina Film Fest September 8-27 and the Burbank International Film Festival September 10-13, 2020.

The premise of the series was inspired by the real-life experiences of co-creator and executive producer Staples (who also plays Mia). When Staples first got to LA, she ended up accidentally moving into an infamous apartment complex full of wayward social media personalities and ex-Vine stars. She soon befriended a set of twin helicopter pilots, an Instagram model, and Oprah’s godson, all sitting by the pool taking selfies.

Realizing she was sitting on a goldmine of stories and characters, Staples teamed up with Kornfeld, an alumna of UCB and they immediately understood that managing influencers must be an insane and unique job that they haven’t seen explored in scripted television before. Thus, “The Influencers” was born.

In the pilot, we meet Mia, who lands an interview at her dream company, ICM - International Creative Management – one of the top agencies in the world. Her goal is to represent stars like Emma Stone and Ryan Gosling; but when she aces the interview with Greg (the enthusiastic and slightly stressed agency manager) Mia realizes something is wildly wrong. This is ICM -- Internet Celebrity Moguls, that represents eccentric YouTube stars, like viral sensation Chewbacca Mom.

Mia wants to leave immediately, but their best client and extreme “prankster” takes a liking to her sarcastic commentary on social media influencers and she gets promoted to agent – an offer she can’t turn down. Now it’s up to her to keep the company afloat by signing new talent, keeping the influencers happy and putting out constant fires. So who has time for a meaningful personal life?

Kornfeld and Staples come from wildly different backgrounds, but the partnership took off over their shared love of comedy which was nurtured at UCB.

Staples hails from Orange County and graduated from Northwestern University’s Acting and Musical Theater Program in Chicago before moving to LA and honing her comedic voice as a multi-hyphenate actress, producer, and writer. She has been seen in Viral Videos such as Clickhole’s “500lb Man” with 15 million views, a guest-star role in “In The Cut” on Bounce TV, appeared Off-Broadway at the Cherry Lane Theater, and is a producer/actress in the upcoming comedy feature film “Take Me To Tarzana,” Directed by Maceo Greenberg.

The co-creator of “The Influencers,” Kornfeld, is an Australian Writer who has written for British YouTube influencer, Charlie McDonnell, as well as “TXT Stories” for Facebook Watch (3 million followers), and “Warigami” for the CW Seed. Ally spent many years writing on a sketch comedy troupe at the Magnet Theater in NYC, and toured comedy festivals including Montreal Sketchfest, Chicago Sketchfest and Boston Comedy Arts Festival.

Asked to describe “The Influencers,” Staples says “In a world where you can make a living squishing food on camera and burping at cows, this show explores that bonkers world.” Kornfeld adds, “It’s 30 Rock, but with influencers and cats, and a lot of heart. We love the crazy world of YouTube stars.” Despite the off-the-wall humor, both women feel that at its heart, the show explores what YouTube, Instagram, and Social Media reveals about ourselves as a culture. What causes our innate desire to be liked and followed?

For online ticket information for “The Influencers” at both festivals, please visit their respective websites: info@CatalinaFilm.org Catalina Film Institute and The Influencers.