Stand-up comedian and author Jordan Pease joins me Monday at 9:30am! 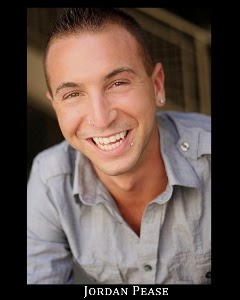 There aren’t many gay comics who would leap at the chance to perform for a crowd of military veterans or suburban Latinos. But where some might see a potentially resistant audience, stand-up comedian and author Jordan Pease only sees a new potential group of friends ready to laugh.

Born and raised in New Jersey into an Italian-American family that has embraced his adult identity (“When I came out to my grandparents, their only comment was that they hoped I married an Italian man”), Pease mines the sometimes painful and more difficult avenues of life in order to fashion self-deprecating jokes that render him equal parts endearing and outrageous. The same tone can be found in his memoir, Accidentally Okay, which recalls his extended stay in Verona, Italy, with an acute sense of observation and self-awareness. He’s also contributed columns to Huffington Post and maintains an active presences on his website, thejordanpease.com.

Citing Chelsea Handler and David Sedaris as two of his role models, Pease has found great success even though he’s been doing stand-up professionally for less than three years; he’s already been named “Funniest New Comic in LA” and appears regularly at the Comedy Store and the Laugh Factory, sometimes sharing stage time with idols like Sarah Silverman and Steve Trevino.

That’s not to mention the gigs he does throughout the country and in comedy clubs in Southern California, where he’s happy to perform in front of mostly straight audiences on a bill with heterosexual comedians. “There are a lot of great gay comedians who focus on doing all-gay shows, which is great,” says Pease. “But I know that to get to where I want to be, I have to learn how to make everyone laugh.”

Whether it is posting Twitter accounts of his colorful lifestyle to his 15,000 followers, or polishing his writing skills to ascend the New York Times bestseller list, the spontaneous, savvy, and always sassy Jordan Pease is positioned to take his place alongside the other great men and women who have devoted their lives to make audiences feel happy.
Posted by Get the Funk Out! at 11:48 AM