Brad Allgood, Director/Editor/Director of Photography, joined me Monday at 9:30am PST to talk about his award-winning documentary Landfill Harmonic! 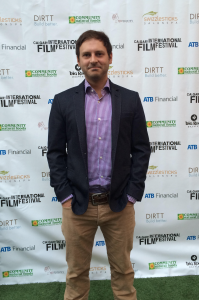 If you missed Brad Allgood on today's show, listen here!

Brad Allgood (Director/Editor/Director of Photography) Brad is an award-winning filmmaker with a background in international development and public health. His films have taken him into the heart of the Nicaraguan rainforest, as well as to remote Caribbean islands, the sparse Kalahari desert and dense African jungles. While working for PBS Marketing and Communications, he produced national campaigns for PBS programs including the Emmy Award-winning series Downton Abbey and the American Experience film Freedom Riders. Before transitioning to filmmaking, Brad served for 3 ½ years as a Peace Corps Volunteer in Nicaragua. He holds a M.A. in Film and Video Production from American University and a B.S. in Biology and Geology from the University of Georgia. 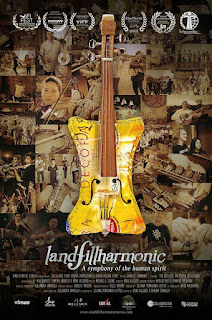 You may have heard the incredible story of The Recycled Orchestra of Cateura, the subjects of LANDFILL HARMONIC, featured this week on NPR Morning Edition. They've also been featured on 60 MINUTES, TEDx, NPR Music, PIX 11 Evening News, CBS Morning News, The Telegraph, and many others. Orchestra founder Favio Chavez began teaching music to children living in the slums of Cateura, Paraguay. Realizing expensive instruments were unattainable for most families, Chavez and carpenter Nicolas Gomez began crafting instruments using materials found in the landfill.

When a short Kickstarter video went viral, The Recycled Orchestra of Cateura was catapulted into the global media spotlight. LANDFILL HARMONIC shares the adventures and hardships of this close knit group of young musicians as they share their inspiring journey and music with the world. You can check out the trailer for LANDFILL HARMONIC HERE

Don't miss the opportunity to see LANDFILL HARMONIC on the big screen, followed by live performances of The Recycled Orchestra in Los Angeles.

The Film Collaborative and Emerging Pictures

In Spanish with English subtitles

Audiences around the world have praised the incredible true story of these talented young people at over 200 film festivals and winning over 40 film prizes including the Audience Award at the South By Southwest Film Festival, AFI DOCS Festival, Vancouver Film Festival; official selection at the Sheffield Film Festival and winner of the Documentary Award for The Humanitas Prize.

LANDFILL HARMONIC chronicles the incredible journey of Paraguay's Recycled Orchestra of Cateura. Orchestra Founder Favio Chavez had hopes of sharing music with the children of Cateura, a poverty stricken slum next to the capital's largest landfill. Since expensive musical instruments were not within attainable for families in Cateura, Favio, along with carpenter and trash picker Nicolas "Cola" Gomez, began to craft instruments from materials found in the landfill to provide children with the opportunity to play. They journey exceeds all expectations as they find themselves playing for audiences around the world, even accompanying artists such as Stevie Wonder, Metallica and Megadeth. They've also played for Pope Francis, and last week performed at The United Nations in NYC. Don't miss this exciting opportunity to see the orchestra in person.

followed by Q&A with filmmakers:

with special guests Favio Chavez and The Recycled Orchestra of Cateura

RSVP for both screenings HERE

LANDFILL HARMONIC is the award winning and emotionally inspiring film following the Recycled Orchestra of Cateura, a Paraguayan musical youth group that plays instruments made entirely out of garbage and waste from the garbage dump in their home town in Paraguay. When their story goes viral, the orchestra is catapulted into the global spotlight. Under the guidance of idealistic music director Favio Chavez, the orchestra must navigate a strange new world of arenas and sold-out concerts. The film is a testimony to the transformative power of music and the resilience of the human spirit.

LANDFILL HARMONIC has played over 200 film festivals and

has received over 30 Awards at festivals worldwide