Linda Stasi, New York Daily News columnist and NY1 "What a Week" co-host has a doozy of a thriller coming Sept. 19 called, "The Book of Judas." Linda joined host Janeane Bernstein 9/18 to talk about her latest work and more! 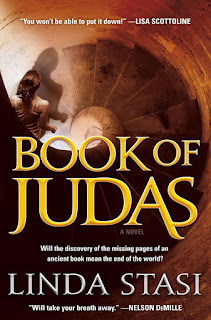 
Linda talks about her continent-hopping research project over 5 years - Israel to Rome to her hometown bank in New York - to uncover what may be one of the greatest revelations to be made in decades, if not centuries, about the Christian faith - Jesus and Judas and their "real" relationship.

The Book of Judas (September 19, 2017) is a tour de force. Linda had more than 200 fans waiting in line at Book Expo of America at the Javitz Center a few weeks ago, to get the first of her signed advance reader copies.

There's not a brighter fire-cracker in Manhattan than Linda! The New York Times has interviewed her several times already about Donald Trump because she covered him before anybody was...and she knows how to deliver pithy quotes for interviews!

New York Times bestselling author Nelson DeMille says the book “will take your breath away.” And New York Times bestselling author Lisa Scottoline calls Linda "a modern-day Damon Runyon ... You won't be able to put down Book of Judas, and you'll root for Russo through this gritty, breakneck thriller against a vivid backdrop worth of The Da Vinci Code.”

About The Book of Judas
When her infant son is placed in mortal danger, New York City reporter Alessandra Russo is forced to save him by tracking down the missing pages of the Gospel of Judas, a heretical manuscript that was unearthed in Al-Minya, Egypt in the 1970's. The manuscript declares that Judas was not the betrayer, but the beloved, of Jesus. The Gospel disappeared, only to turn up decades later, rotted beyond repair in a Long Island bank deposit box. Rumors ran rampant that the most important pages had been stolen.

Do the lost pages reveal a secret that will challenge Christianity's very belief about the creation of life, or even the power to unleash Armageddon? What if such explosive documents fell into the hands of modern-day terrorists, dictators, or religious fanatics?

During her investigation, Alessandra is plunged into a dark world of murder, conspiracy, sexual depravity, and most importantly, a race against the clock to save her own child.


New York City reporter Alessandra Russo is pulled into yet another intrigue; this time her friend Roy inherits a strange religious manuscript, tightly protected in a mysteriously locked tube. Rumors run rampant that these are missing pages from a rotted codex, the heretical Gospel of Judas, which postulated that Judas was not the betrayer, but the beloved of Jesus. Alessandra’s interest in the manuscript is truly piqued when she is faced with tragedy no mother should experience, and must track down the missing pages of the Gospel to set things right. Do the lost pages reveal a secret that will challenge Christianity's very belief about the creation of life, or even the power to unleash Armageddon? What if such explosive documents fell into the hands of modern-day terrorists, dictators, or religious fanatics? Can Alessandra crack the code and learn what the Gospel of Judas is truly saying to the faithful? During her investigation, Alessandra is plunged into a dark world of murder, conspiracy, sexual depravity, and most importantly, a race against the clock to save her own child.

ABOUT THE AUTHOR
LINDA STASI, the popular and well-read columnist for the New York Daily News, and previously for the New York Post, has also been an on-camera TV co-host with Mark Simone for the past 18 years on NY 1 - Spectrum’s “What a Week!” She was named “One of the Fifty Most Powerful Women in NYC” and has won numerous awards. She is a two-time winner of Best Column by the Newswomen’s Club of NY, Best Humor Columnist, and named Woman of the Year by the Boys Town of Italy for her charitable work such as driving a tractor-trailer in an 18-truck convoy from NYC to the gulf states with hurricane relief supplies.

Stasi has appeared on TV talk shows and news channels such as The Today Show, Good Morning America, Hardball, Good Day New York, The O’Reilly Factor, and The View, as well as CNN, Fox News, MSNBC news shows, and many others. She has appeared several times on “Coast to Coast” with George Noory and is a regular guest on I Radio’s nationally broadcast Mark Simone Show, and countless others around the country. Brash, funny and opinionated, the acerbic Stasi’s first novel, The Sixth Station, published in January of 2013 by Forge Books was hailed as, “A helluva religious thriller,” by Nelson DeMille, while Steve Berry said, “You’ll be grabbing the pages so tight your knuckles will turn white!” Booklist said of the book, “Dan Brown and Steve Berry fans have another controversial novel in which to lose themselves.” For The Sixth Station, Stasi was selected as a finalist for the Mary Higgins Clark Award.

Stasi has also authored five non-fiction books – Looking Good Is the Best Revenge, A Field Guide to Impossible Men, Simply Beautiful, Boomer Babes, and Scotto Sunday Suppers. Not afraid to say what’s on her mind in her popular Wednesdays and full-page Sunday columns in the New York Daily News, which has a print readership of more than 650,000 on Sundays, and millions of digital readers daily. Linda Stasi’s husband, Sid Davidoff, has been named to City & State’s “100 Most Powerful,” and they were the first couple ever married by NYC Mayor Bill de Blasio. Her daughter Jessica Rovello was named by INC Magazine as the top CEO of the Best Company to Work For in the USA, Arkadium.

www.lindastasi.com
Posted by Get the Funk Out! at 6:05 PM