9/11 9:00am pst - Michael Kotick is running in the 48th District for Orange County's hotly contested Congressional race! He joins host Janeane Bernstein 9/11/17 at 9:00am pst! 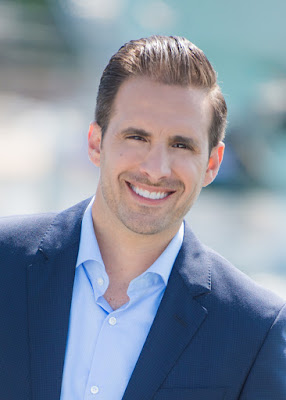 
Michael Kotick has an impressive track record. At 33, he has developed and managed over $1 billion dollars of business. He became one of the youngest executives in Fortune 100’s Nestlé pioneering new business models, and he designed and implemented an ongoing Orange County-based national program that addresses two critical issues: veteran employment and an auto industry technician shortage.Michael Kotick is also author of a new book that outlines business strategies for the ever-evolving digital and social media age

"Opportunities for our future are being neglected. I am running for office because the politics of yesterday are not the solutions for tomorrow. Business is evolving in unprecedented ways, along with the skills required to support its growth. We need to unite in action to ensure our economy thrives and our compassion for community deepens. I will fight for families and businesses in Orange County so they are protected, healthy, and prepared to succeed."

Through fresh leadership and the courage of conviction, Michael Kotick is dedicated to moving Orange County forward. He now asks Orange County voters to join his Congressional campaign to best represent the needs and hopes of California’s 48th District.

Michael Kotick is a New Generation leader. At 33, the southern California native and Laguna Beach resident has developed and managed over $1 billion dollars in business, while skyrocketing through the ranks of Fortune 100 giant Nestlé to become one of its youngest executives. Michael is also author of an innovative new book on business development in a digital and social media age. Declaring his Democratic candidacy for California’s 48th Congressional race, he brings a refreshing, candid voice to his District (Orange County): “Walls of no height nor intolerance to any degree will shield Americans from the need to advance in this increasingly complex world. Orange County can become a shining example of our nation’s strength and a united voice for our future.”

Michael Kotick’s long-standing interest in business and public policy is built upon a formal economics education and includes two postgraduate degrees -- an MBA in Marketing and Finance from Michigan State University’s Eli Broad College of Business, and a Masters in Global Management from the Thunderbird School of Global Management. He also has a Behavioral Economics Certification from Universidad del Salvador in Buenos Aires, Argentina. In almost every year of business and schooling, Michael Kotick has received accolades for his leadership. He created a pioneering Orange County corporate partnership that guarantees job interviews for US Army Veterans when challenged to help solve an automotive industry labor shortage. He co-founded a new chapter of the Make-A-Wish Foundation. He was Student Body President in high school, Class President at Michigan State University, Student Body President while receiving his MBA, and helped his team win a Division One Big 10 Soccer Championship.

At this critical time, Michael Kotick is inspired to public service. Encouraged by fellow business leaders, colleagues and family, he now asks Orange County voters to join his Congressional campaign to best represent the values and interests of California’s 48th District.