On 1/15/18, KUCI's Janeane Bernstein speaks with Naama Bloom, who will talk about her health website HelloFlo.com and her bold and savvy book, "HelloFlo: The Guide, Period" 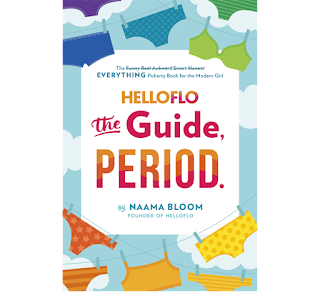 In this bold, savvy, and feminist new take on a body book, Bloom hopes to remove the stigma attached to puberty. When her women’s health site – HelloFlo.com – launched in 2015, they did just that, with two groundbreaking videos that went viral: “First Moon Party” (41+ million YouTube views) and “Camp Gyno” (12+ million YouTube views). Her new book is equally frank. HELLOFLO: THE GUIDE, PERIOD makes health and wellness as easy as possible for young girls to understand, helping them navigate everything from body changes to emotional well-being.

Naama Bloom will discuss her new book,
as well as these relevant topics:

Studies show that doctors have a tendency not to take a woman’s pain seriously, undertreat them when they do mention symptoms, and take a longer period of time to actually give them medication. Couple that with a young woman’s age, and it’s no wonder that so many young women and girls not only don’t get the help they need, but grow up thinking that they don’t deserve it in the first place.

The Trump administration’s recent rollback of the Obamacare birth control mandate hit women hard, and not just for those using the pill for family planning. It’s also prescribed for a variety of medical conditions, including endometriosis, irregular periods, chronic acne, and hormonal imbalances that affect countless women and teens.

In developing countries, many girls grow up in communities where menstruation is shrouded in shame and stigma, misinformation is rampant, and clean menstrual supplies are scarce. Girls and women miss classes, drop out of school, and fail to reach their full potential because of menstruation. Over the past few years, a “menstruation movement” has swept the U.S., aiming to destigmatize periods and bring safer products to women and girls everywhere.

A Nepali “menstruation hut” ritual claimed the life of a teenage girl in July after she was bitten by a snake while banished to a cowshed during a menstruation ritual. The 19-year-old victim was taking part in chhaupadi, a common practice in the west of Nepal in which women, considered unclean during menstruation, are sequestered for the extent of their periods. Chhaupadi dates back centuries and has its roots in Hindu taboos over menstruation. Outlawed by Nepal’s Supreme Court in 2005, the practice continues amid claims the country is turning a blind eye to the deaths of women and girls.