7/23/18 9:30am pst - Founder and CEO of Track Maven, Allen Gannett, joined Janeane to talk about his latest book, The Creative Curve 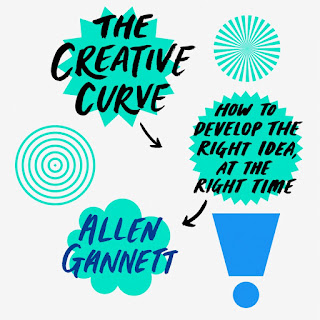 What do DEAR EVAN HANSON, Netflix, Black-Ish, YouTube,and Ben & Jerry's have in common? In the new book, THE CREATIVE CURVE: How to Develop the Right Idea, at the Right Time, Allen Gannett, a Forbes and Inc. “30 Under 30” awardee, discusses the science and patterns behind innovation to reveal the truth behind creative success. Gannett looks at just what make for "creative genius." and how we all have the ability to achieve it.

FOUNDER AND CEO OF TRACK MAVEN ALLEN GANNETT EXAMINES THE SCIENCE BEHIND COMMERCIAL “HITS,”AND HOW TO ENGINEER MAINSTREAM SUCCESS

How to Develop the Right Idea, at the Right Time
By Allen Gannett

"THE CREATIVE CURVE takes on one of the most pernicious beliefs about creativity -- that it is limited to natural-born geniuses. In fact, as Allen Gannett argues so capably, we all have the potential to come up with ingenious ideas and make them a reality. Seasoned with lively anecdotes, THE CREATIVE CURVE will take you through the science and practice of creativity so that you can start tapping into your own breakthroughs.”

— Daniel Pink, author of WHEN and TO SELL IS HUMAN

The Creative Curve includes interviews with the following:

The flavor team at Ben & Jerry’s

CEO and Founder of Track Maven Allen Gannet believes that we have been spoon-fed the notion that creativity is the province of genius — of those favored, brilliant few whose moments of insight arrive in unpredictable flashes of divine inspiration. And if we are not a genius, we might as well pack it in and give up. Either we have that gift, or we don’t. But that simply isn’t true. In THE CREATIVE CURVE: How to Develop the Right Idea, at the Right Time (Currency; June 12, 2018; $28.00) by big data entrepreneur Allen Gannett, a Forbes and Inc. “30 Under 30” awardee, tells us why and shows us how to get it.


Recent research has shown there is a science behind increasing the odds of commercial success in any creative field, whether creating music, writing a breakout novel, starting up a company, or mounting an effective marketing campaign. What is called creative genius is really the ability to understand what Allen Gannett calls “the creative curve” and use it to engineer mainstream success.


Gannett is Founder and CEO of TrackMaven, a company that works with large brands to help them uncover the meaning—revealed by the patterns—within their marketing data. In working with major brands like Microsoft, Marriott, Saks Fifth Avenue, Home Depot, Aetna, Honda, and GE, Gannett noticed a significant pattern: most marketers, even well-known ones, weren’t hitting their goals. While their ad campaigns demonstrated creative thinking, their commercial success often fell short. He asked himself, could there be a method to combining creative and commercial success?


In THE CREATIVE CURVE, Gannett overturns the mythology around creative genius and reveals the truth about creative success: that there is in fact a science behind what becomes a hit. New findings in neuroscience give us an unprecedented ability to decode and engineer the necessary moments of “inspiration” that create mainstream and popular work. Gannett says, “There is a pattern that successful creative people leverage to make hits, one that’s accessible to almost anyone. It’s intuitive, but it’s also learnable. And it has nothing to do with mysticism. You don’t need to do LSD to get inspired or pray for a simple moment of blinding inspiration.”


Gannett spent hundreds of hours with modern creative geniuses to find patterns to their achievement; ranging from world-renowned chefs to rock stars, and from Broadway sensations—like the team behind the Tony Award–winning show Dear Evan Hansen—to the founder of Reddit. He shares the little-known but entertaining backstories to enduring creative breakthroughs by the Beatles, J.K. Rowling, and others. Even more interesting, many were not aware they were following a pattern. They had all arrived at the same methods independently.


What the world’s most creative people repeatedly do—whether consciously or unconsciously—is find the point of optimal tension between familiarity and novelty, safety and surprise, similarity and difference. The Creative Curve reveals the learnable four-step process that they follow to find this sweet spot:

Consumption: Gannett explores how, and the science behind why, consumption of information can provoke your own flashes of genius.


Imitation: Creatives have to find a way to add just the perfect amount of novelty. To do this, they engage in something that may seem surprising: imitation.


Creative Communities: Gannett shows how building a community around oneself is critical to creativity.


Illuminated with behind-the-scenes stories from Ben & Jerry’s to the Beatles, from Andrew Ross Sorkin to Kurt Vonnegut, from Facebook to Netflix, The Creative Curve is a practical playbook for those in any creative field looking to achieve breakout success.

ALLEN GANNETT is the founder and CEO of TrackMaven, a software analytics firm whose clients have included Microsoft, Marriott, Saks Fifth Avenue, Home Depot, Aetna, Honda, and GE. He has been on the “30 Under 30” lists for both Inc. and Forbes.