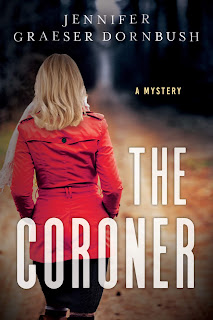 LISTEN to today's conversation with Jennifer!

When you grow up as the daughter of a medical examiner, you are bound to have some stories to tell. Alumna Jennifer Dornbush has turned those stories into a career — she’s advised crime dramas for television and movies, and wrote a guide to creating authentic crime dramas called Forensic Speak.

And now she’s written her first fiction book “The Coroner” which is being released from Crooked Lane Books on Aug. 7. Jennifer shares some great stories with KUCI host Janeane Bernstein!

In “The Coroner,” a surgical resident returns to the small town she’s from after her father, the local coroner, has a heart attack. He is unable to perform the autopsy of a young girl whose body was recently found, and she is called upon to take her place.

When a young doctor makes a reluctant trip home and confronts her past, she is sucked into a dangerous mystery

LOS ANGELES, California – When surgical resident Emily Hartford returns to the small town where she grew up after more than a decade away, she is confronted with issues from her past, and a mystery from the present. Her father, the local coroner, has had a heart attack, and is unavailable to autopsy the body of a girl found in suspicious circumstances at a horse stable. When he asks her to take over in his stead, she is resistant, especially as that would mean working closely with the sheriff, who just happens to be her ex-boyfriend.

Emily worries about her father’s declining health and tries to tend to her tenuous relationship with her fiance from afar. And as she and Nick delve more deeply into what happened to Julie
Dobson, Emily realizes they will be in danger if they keep poking around where they aren’t wanted.

Fans of crime drama and strong female characters will love this twist on a detective novel that will leave your heart racing and keep you turning pages until the end. Jennifer Dornbush is a writer, speaker, and forensic specialist creating a diverse range of stories that shed light on the dark places of the human experience. As a daughter of a medical examiner, she investigated her first fatality when she was 8. She has several crime dramas in development, and a feature film inspired by her novel, God Bless the Broken Road, is slated for release Sept. 21, 2018. She is also the author of Forensic Speak: How To Write Realistic Crime Dramas, hailed as a north star to creating authentic crime dramas. Jennifer teaches seminars and speaks on writing crime fiction for screen, forensic fundamentals, and death investigation.

She hosts webinars on crime writing through Writer’s Digest; and has collaborated with The Writers Store and Script Magazine to produce a video on crime writing for writers. She also hosts a YouTube channel on forensics and the writing life. She teaches screenwriting and mentors aspiring writers through the Act One Program, Regent University, and Universita Catholica Milano. She is a member of the Writers’ Guild of American and the Mystery Writers of America.

About the Book
Summoned from her promising surgical career first to her estranged father's bedside, and then his post as medical examiner when his small town needs urgent help with a suspicious death, Emily Hartford discovers home is where the bodies are in this pitch perfect mystery debut.

Recently engaged and deeply ensconced in her third year of surgical residency in Chicago, Emily Hartford gets a shock when she’s called home to Freeport, MI, the small town she fled a decade ago after the death of her mother. Her estranged father, the local medical examiner, has had a massive heart attack and Emily is needed urgently to help with his recovery. Not sure what to expect, Emily races home, blowing the only stoplight at the center of town and getting pulled over by her former high school love, now Sheriff, Nick Larson.

At the hospital, she finds her father in near total denial of the seriousness of his condition. He insists that the best thing Emily can do to help him is to take on the autopsy of a Senator’s teen daughter whose sudden, unexplained death has just rocked the sleepy town. Reluctantly agreeing to help her father and Nick, Emily gets down to work, only to discover that the girl was murdered. The autopsy reminds her of her many hours in the morgue with her father when she was a young teen—a time which inspired her love of medicine. Before she knows it, she’s pulled deeper into the case and closer to her father and to Nick—much to the dismay of her big city fiancé. When a threat is made to Emily herself, she must race to catch the killer before he strikes again in The Coroner, expertly written and sharply plotted, perfect for fans of Patricia Cornwell and Julia Spencer Fleming.
Posted by Get the Funk Out! at 6:42 AM