Lisa Feldman Barrett, PhD, is a University Distinguished Professor of Psychology at Northeastern University, with appointments at Harvard Medical School and Massachusetts General Hospital. In addition to the book How Emotions are Made: The Secret Life of the Brain, Dr. Barrett has published over 200 peer-reviewed, scientific papers appearing in Science, Nature Neuroscience, and other top journals in psychology and cognitive neuroscience, as well as six academic volumes published by Guilford Press. She has also given a popular TED talk.

Dr. Barrett received a National Institutes of Health Director’s Pioneer Award for her revolutionary research on emotion in the brain. These highly competitive, multimillion dollar awards are given to scientists of exceptional creativity who are expected to transform biomedical and behavioral research.

Among her many accomplishments, Dr. Barrett has testified before Congress, presented her research to the FBI, consulted to the National Cancer Institute, appeared on Through The Wormhole with Morgan Freeman and The Today Show with Maria Shriver, and been a featured guest on public television and worldwide radio programs. She is also an elected fellow of the American Academy of Arts & Sciences and the Royal Society of Canada. 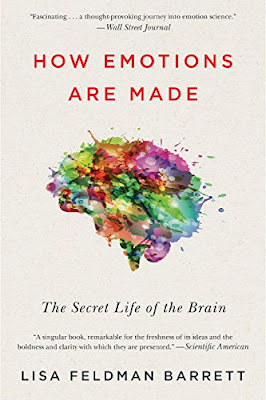 A new theory of how the brain constructs emotions that could revolutionize psychology, health care, the legal system, and our understanding of the human mind

Emotions feel automatic, like uncontrollable reactions to things we think and experience. Scientists have long supported this assumption by claiming that emotions are hardwired in the body or the brain. Today, however, the science of emotion is in the midst of a revolution on par with the discovery of relativity in physics and natural selection in biology--and this paradigm shift has far-reaching implications for us all.

Leading the charge is psychologist and neuroscientist Lisa Feldman Barrett, whose theory of emotion is driving a deeper understanding of the mind and brain, and shedding new light on what it means to be human. Her research overturns the widely held belief that emotions are housed in different parts of the brain and are universally expressed and recognized. Instead, she has shown that emotion is constructed in the moment, by core systems that interact across the whole brain, aided by a lifetime of learning. This new theory means that you play a much greater role in your emotional life than you ever thought. Its repercussions are already shaking the foundations not only of psychology but also of medicine, the legal system, child-rearing, meditation, and even airport security.

Why do emotions feel automatic? Does rational thought really control emotion? How does emotion affect disease? How can you make your children more emotionally intelligent? How Emotions Are Made answers these questions and many more, revealing the latest research and intriguing practical applications of the new science of emotion, mind, and brain.

Watch Dr. Barrett's TED Talk!
https://lisafeldmanbarrett.com
Posted by Get the Funk Out! at 6:26 AM