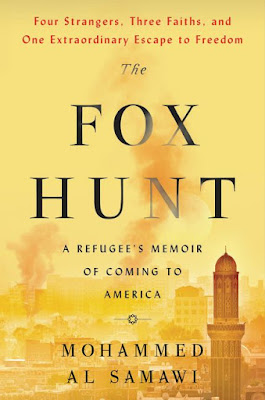 "A gripping account of terror and escape.” — New York Times Book Review
The Fox Hunt tells one young man’s unforgettable story of his harrowing escape from Yemen's brutal civial war with the help of a daring plan engineered on social media by a small group of interfaith activists in the West.
WINNER: 2019 NAUTILUS BOOK AWARDS • A 2019 NATIONAL JEWISH BOOK AWARDS FINALIST


WATCH how Mohammed escaped death through the power of FACEBOOK.

Mohammed will speak about: 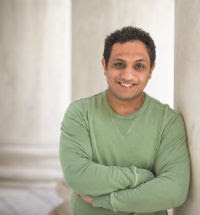 Born in the Old City of Sana’a, Yemen, to a pair of middle-class doctors, Mohammed Al Samawi was a devout Muslim raised to think of Christians and Jews as his enemy. But when Mohammed was twenty-three, he secretly received a copy of the Bible, and what he read cast doubt on everything he’d previously believed. After connecting with Jews and Christians on social media, and at various international interfaith conferences, Mohammed became an activist, making it his mission to promote dialogue and cooperation in Yemen.

Then came the death threats: first on Facebook, then through terrifying anonymous phone calls. To protect himself and his family, Mohammed fled to the southern port city of Aden. He had no way of knowing that Aden was about to become the heart of a north-south civil war, and the battleground for a well-funded proxy war between Iran and Saudi Arabia. As gunfire and grenades exploded throughout the city, Mohammed hid in the bathroom of his apartment and desperately appealed to his contacts on Facebook.

Miraculously, a handful of people he barely knew responded. Over thirteen days, four ordinary young people with zero experience in diplomacy or military exfiltration worked across six technology platforms and ten time zones to save this innocent young man trapped between deadly forces— rebel fighters from the north and Al Qaeda operatives from the south.

The story of an improbable escape as riveting as the best page-turning thrillers, The Fox Hunt reminds us that goodness and decency can triumph in the darkest circumstances.Mohammed AL Samawi is an interfaith activist, a refugee from Yemen and author of The Fox Hunt: A Refugee’s Memoir of Coming to America (William Morrow), which shares the moving story of love, war, and hope in which he recounts his harrowing personal transformation from a traditionalist to an interfaith activist, and how he escaped the brutal civil war in Yemen with the help of a daring plan engineered on social media by a small group of Facebook friends in the West. The Fox Hunt is a 2019 Nautilus Book Awards winner and was a finalist for the National Jewish Book Awards.

Over thirteen days, four ordinary young people with zero experience in international diplomacy or military exfiltration worked across six technology platforms and ten time zones to save this innocent young man trapped between deadly forces—rebel fighters supported by Iran and AL Qaeda operatives supported by Saudi Arabia. The story of an improbable escape as riveting as the best page-turning thrillers, Fox Hunt is also an unforgettable story of compassion, friendship, faith and redemption. Like I Am Malala, A Long Walk Gone, and The Dressmaker of Khair Khana, it sheds light on events roiling the world, and offers hope and inspiration, reminding us that goodness and decency can triumph in the darkest circumstances.

Sharing his powerful story across the globe, AL Samawi has addressed audiences from religious organizations to schools and universities to humanitarian and global groups.

In 2019, AL Samawi launched the Abrahamic House, a multi-faith incubator for social change with a mission to build sustainable interfaith learning and action across Muslim, Jewish, Bahai and Christian communities in order to foster an environment of respect, justice, and social change. Previously AL Samawi worked for several NGOs, including Oxfam and World Relief; he also worked as a freelance researcher for Boehncke Information Technology GmbH for more than two years. In those capacities, he authored more than 30 studies and reports about Yemen, and reported extensively on Sudan, including Darfur.

Currently he resides in Florida.

"Students were mesmerized and inspired by Mohammed’s story of escaping Al Qaeda and fleeing Yemen. Through his story, we learned about the history of Yemen, the complexity of interfaith issues, and the ongoing refugee crisis in the Middle East. Our series regularly features icons and changemakers in business, the arts, sports, and philanthropy. Mohammed is among the most compelling speakers we’ve hosted and the students loved him."
--David Belasco, Executive Director & Adjunct Professor, Lloyd Greif Center for Entrepreneurial Studies, University of Southern California

“Mohammed has led a remarkable life in which he himself has transformed into a global ambassador for peace. His ability to communicate his experience both inside and outside his home country of Yemen has been inspiring and enlightening for us all. We are fortunate that his enduring determination to help build peace in the Middle East is matched by his eloquence in sharing his personal story”
--Aileen Getty, Aileen Getty Foundation

“Despite my 25-plus years in international affairs, including substantial work on issues confronting the Middle East and North Africa, I have learned life-changing lessons from Mohamed Alsamawi. Mohamed Alsamawi can speak in concrete terms of both the best hopes and the worst inhumanities that plague the region and the roles -- both positive and negative -- of governments, civil society and of individuals who have the courage to question and learn. His deep humanity, generosity and ready humor will open eyes everywhere to what his own life reflects -- intolerance and fear of “others” debases and endangers us all, whereas recognizing and strengthening individual and community bonds across all borders (physical, cultural, social, ethnic and religious) makes life far better and more productive. Not only is it possible to radically change perspectives, but it is possible to develop trust and adopt inclusive, creative approaches that help solve the world’s most challenging problems.
--Anne Pence , Covington & Burling LLP

“Mohammed Al-Samawi gave a poignant, moving account of his escape from war-torn Yemen, during the NYC Muslim-Jewish Solidarity Committee’s 1st Annual Iftar in a Synagogue in 2015. The event was Mohammed’s first NYC speaking engagement and he captivated our community; many members still discuss his impact two years later. His story of how a global network of peace activists from different cultures and religions helped him escape death resonated deeply with all attendees. We are honored to work with Mohammed Al-Samawi and encourage all to listen to his story.”
--Michelle Koch and Zena Schulman, NYC Muslim-Jewish Solidarity Committee

“The Persian Gulf Institute (PGI) is grateful for the invaluable insights Mohammed Al Samawi has brought to the conversation on Yemen's current crisis and the affairs of the broader region. At PGI's recent panel discussion on Yemen, Mr. Al Samawi offered both an insightful geopolitical analysis of the current conflict and an important local perspective on the war's human toll. Mr. Al Samawi's remarkable personal experiences make him a unique expert on his home country.”
--Robert Bon, Persian Gulf Institute

“Mohammed's extraordinary story from Yemen to the U.S. captures not only the power of interfaith cooperation, but also the human condition at its finest. In his talks, Mohammed showcases the rare ability to sense where an audience is starting from, drawing them into an inspiring and fulfilling journey. Along the way, he mixes in his unique humor, charm and grace. If we are to build peace in the Middle East, we must listen to Mohammed's story.”
--Steven Olikara, Founder and President of Millennial Action Project
Posted by Get the Funk Out! at 8:47 PM