Dr. Dale Bredesen, author of THE FIRST SURVIVORS OF ALZHEIMER’S: How Patients Recovered Life an Hope in Their Own Words 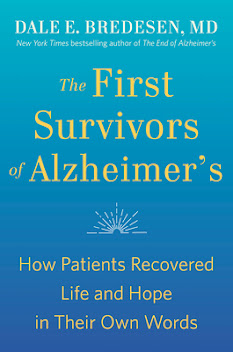 The End of Alzheimer's Program:
The First Protocol to Enhance Cognition and Reverse Decline at Any Age

First person stories of patients who recovered
from Alzheimer's Disease--and how they did it.
It has been said that everyone knows a cancer survivor, but no one has met an Alzheimer’s survivor – until now. In his first two books, Dr. Dale Bredesen outlined the revolutionary treatments that are changing what had previously seemed like the inevitable outcome of cognitive decline and dementia.

Now, THE FIRST SURVIVORS OF ALZHEIMER’S is a collection of first person stories of patients who recovered from Alzheimer's Disease--and how they did it. In these moving narratives, you can hear directly from the first survivors themselves--their own amazing stories of hope told in their own words.


These first person accounts honestly detail the fear, struggle, and ultimate victory of each patient's journey. They vividly describe what it is like to have Alzheimer's. They also drill down on how each of these patients made the program work for them--the challenges, the workarounds, and the encouraging results that are so motivating. Dr. Bredesen includes commentary following each story to help point readers to the tips and tricks that might help them as well. This book will give unprecedented hope to patients and their families.

Dr. Bredesen is also comments on the approval of a new Alzheimer’s drug, Aducunamb, and why he is opposed to it.

Dr. Bredesen’s End of Alzheimer’s Program:
The overall goal of the program is summarized as removal, resilience, and rebuilding:

Dale Bredesen, M.D., is internationally recognized as an expert in the mechanisms of neurodegenerative diseases such as Alzheimer's disease, and the author of the New York Times bestsellers The End of Alzheimer's (Avery, 2017) and The End of Alzheimer's Program (Avery, 2020). He has held faculty positions at UC San Francisco, UCLA, and the University of California San Diego, and directed the Program on Aging at the Burnham Institute before coming to the Buck Institute for Research on Aging in 1998 as its founding president and CEO. He is currently a professor at UCLA.