UCLA Softball’s first All-American, National Champion, and Hall of Famer Coach Sue Enquist featured on Get the Funk Out! 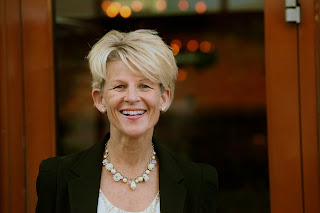 Had an opportunity to meet Coach Sue Enquist at TED-x Irvine a few months ago and was thrilled to have her on my show, "Get the Funk Out!" She has such incredible values, insight and experience into how to aim for your personal best, how not to be our own worst critic, and how to keep it together in this rollercoaster ride called life. This was a great interview and you can hear it right here. Visit www.sueenquist.com for more.

ABOUT SUE ENQUIST
Sue Enquist holds more National Championships (11) than anyone in the history of softball. She is UCLA Softball’s first All-American, National Champion, and Hall of Famer.
In 2006, Enquist concluded her storied 27 year career as head coach of the UCLA Bruins with a 887-175-1 (.835) record, making her the winningest softball coach among all active coaches.  She is the only person in NCAA Softball history to win a championship as a head coach and a player. Hailed a “coaching legend” by ESPN, Sue Enquist’s tenure produced 65 All-Americans and 12 Olympians.
She has been inducted into the Women's Sports Foundation International Hall of Fame, the National Fastpitch Coaches Association Hall of Fame, and the UCLA Hall of Fame.  Enquist is also the recipient of multiple National Coach of the Year and Pac-10 Coach of the Year honors.
She concluded her UCLA MVP playing career with a career batting average of .401.  In her tenure as both a player and coach, Enquist has a combined 1,314 wins.  UCLA Magazine lists her among the top 20th Century Bruins.
A former World Champion and USA National Team coach and player, she is the only person to have played on the first Pan American gold medal team (1979) and to coach on the first Olympic Team National Staff (1996), which took home the first gold medal in the Olympic Games in Atlanta, Georgia.
Beyond her roles as coach and player, Sue Enquist is regarded as a leading innovator of softball instructional materials and equipment.   In addition to her 25 instructional videos covering all facets of the game, Enquist is the author of the book 101 Offensive Drills for Softball.  Together with MLB Player Don Slaught, she co-developed and co-produced RightViewPro hitting instructional software.  She is also the inventor of the SB401 training bat, as well as the Kwik-Slide Sliding wrap, which increases player protection when sliding.  Her forthcoming book on leadership is slated for release later this year.
Off the softball field, Sue Enquist has gained the reputation as a dynamic and highly sought after international motivational speaker.  Her list of prestigious speaking venues includes: the United States Olympic Committee Leadership Summit (USOC), University of California Office of the President-Risk Management Division(UCLA), Stryker Endoscopy, Major League Baseball (MLB) RBI Softball World Series, LA Dodgers, National Fastpitch Coaches Convention, Women’s Sports Foundation,  USA Olympic Synchronized Swimming Association, Italian Olympic Softball Program, Adidas, Wilson Sports, Easton Sports, National Pro Skaters Convention, California Athletic Directors National Convention, and numerous others.  She also speaks at numerous colleges and high schools across the country.  Currently, she runs over 30 seminars for parents, coaches and players across the United States.
Sue Enquist grew up in San Clemente, California, and is a former professional surfer.  Today she lives in Huntington Beach, California, where she surfs daily and enjoys spending time with her family.
Posted by Get the Funk Out! at 8:39 AM