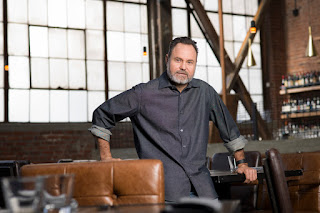 Architect Christopher Mercier, AIA, left Frank Gehry’s Gehry Design Group in 2002 to establish his own architecture practice to create (fer) studio: Form, Environment Research. Their goal: to design contemporary spaces for creative clients, and to re-imagine and re-purpose existing structures, preserving their history and character while adapting them to modern use.

In projects large and small, (fer) studio has designed upscale homes, hotel and hospitality projects, academic and industrial buildings; they even have plans for a large-scale community development called Cedros Market, near San Diego.

Based in Inglewood, California, (fer) studio is at the epicenter of a new wave of urban renewal and restoration. The architecture firm is part of a surge of urban explorers (and intrepid investors) including many writers, artists, designers and entrepreneurs who have discovered the city in their search for affordable live/work spaces and brick-and-mortar retail storefronts.

Mercier wants (fer) studio to be an active and vital part of the community’s transformation. “We want to be part of the re-development of Inglewood,” he says. (fer) studio has consulted with the Mayor of Inglewood and other city officials. “Part of the problem has been that it has no sense of place, no sense of identity,” Mercier explains. “We want to take this place, which has a lot of potential- -good scale and walkability, and bring in a transit hub. If people live, work and shop in a community, it is healthy.”

(fer) studio is staffed by 14 architects, and divides its talents between residential, commercial and hospitality projects. (fer) studio has designed two well-known local restaurants, Father’s Office in Culver City and Connie & Ted’s in West Hollywood. They are the architects behind, the newly opened Officine Brera, an Italian restaurant in downtown Los Angeles’ arts district. Officine Brera is housed in a 1920s industrial building that once was home to the Gas Company. “Officine Brera is a mixture of adaptive reuse set against the influx of a new contemporary geometry that fuses together,” says Mercier.

“It varies from year to year, but our practice usually breaks down to 20 to 30 percent residential, 20 to 30 percent hospitality, and the rest creative office spaces,“ says Mercier. Some of the “creative office spaces” they have designed include a new lobby and reception area for noted business woman Sunnie Kim’s Hana Financial in downtown Los Angeles, and Smashbox Studios in Culver City.

Other recent or currently developing projects include The Hayden, a 30,000 square foot creative office adaptive reuse project in Culver City in the Hayden Tract.

(fer) studio strives to combine environmental sensitivity and trend-setting vision in every project, no matter how large or small and develop a dialogue between interior and exterior space that morphs through the façade.”

ABOUT (fer) studio
(fer) studio began as a one-person firm, headed by Christopher Mercier A.I.A. in 2002. Mercier had worked with renowned architect Frank Gehry at his Santa Monica studio before striking out to establish his own practice.

(fer) stands for Form, Environment and Research, the principles that describe the firm’s design philosophy. Firmly rooted in contemporary modernism, (fer) studio is dedicated to the idea that Form helps to shape the world, and can have a profound ability to positively impact contemporary experience. Through intensive research and the study of the site and environmental conditions, along with extensive client input, each project emerges as appropriate and unique.

(fer) studio’s projects have included “ground up” construction, as well as the rehabilitation and adaptive re-use of a wide range of building types: residential, commercial, hospitality and academic. (fer) studio is passionate about urban design and development and the development of sustainable, livable cities.

In 2005, Douglas Pierson joined (fer) studio (another Gehry alumni). In May 2016, Pierson and Mercier amicably ended their partnership when Pierson moved his family to North Carolina for personal reasons.

Based in Inglewood, California (fer) studio is poised at the tipping point of the latest wave of urban renewal in Southern California. For decades, Inglewood, like Silverlake, Culver City and downtown Los Angeles, had been an underpriced and under-developed urban desert of empty storefronts and a deserted main street. In recent years, Inglewood has been discovered by urban explorers (and intrepid investors): writers, artists and entrepreneurs have arrived in search of affordable live/work spaces and retail storefronts. Mercier and Pierson have participated in various local design projects, including the “Inglewood Living City,” an urban design project (fer) studio developed for the city, as well as a similar project proposal the firm has submitted to Solano Beach called “Cedros Market.”

In 2005, (fer) studio submitted a letter to the City of Inglewood’s Planning Department suggesting the city develop a Live/Work Zoning Ordinance to assist the artists relocating to the area. In 2014 (fer) studio began consulting with the city on a regular basis to see the ordinance through City Council’s approval in 2015.

One of (fer) studio’s local clients was the Three Weavers’ Brewing Company, an artisan brewery and tasting room that opened in 2013. “It was a small project for Doug (Pierson) and I,” Mercier says modestly. “We were basically paid in beer. Three Weavers is a great local hangout and a wonderful addition to the neighborhood. We want to be part of the redevelopment of Inglewood, and we want (fer) studio to be the ‘go-to’ firm for the community.”

Today, (fer) studio is a 14 person firm, dividing its time between various residential, hospitality and commercial projects. Completed restaurant projects on Mercier and Pierson’s roster include the popular Father’s Office in Culver City, Connie & Ted’s in West Hollywood and the newly opened Officine Brera in downtown Los Angeles. All three projects took vital clues from the local urban environment, and intense owner involvement informed the design strategies that made each space unique.

Other recent or currently developing projects include The Hayden, a 30,000 square foot creative office adaptive reuse project in Culver City in the Hayden Tract.

Mercier and Pierson also designed a 5,000 square foot family home in Fullerton, California, a 4,500 square foot single-family residence in Santa Monica, California, and a renovated lobby/reception area for Hana Financial in a downtown Los Angeles high-rise. (fer) studio recently completed Phase I of the photo studio and office space for Smashbox Studios in Culver City, and a reuse project adapting an existing structure into the Hayden, a creative office complex in Culver City.

(fer) studio’s project mix varies from year to year, but they always strive to achieve a balance of residential, commercial and hospitality projects. “This encourages fresh thinking and helps foster over-lapping ideas between building types that may not happen otherwise,” says Mercier. The architects feel this brings vibrancy to their work.

Today (fer) studio is involved in a variety of projects on a wide variety of scales: from small, sustainable residential spaces to large-scale urban centers. The firm is committed to a contemporary vision of design that continues to expand and evolve with each new project. Mercier brings a unique sensibility and intuition along with years of experience to every commission. (fer) studio is comprised of a diverse collection of young architects, artists, and designers assembled around a design approach utilizing both computer-generated models and hand-built physical modeling to provide a more complex and complete understanding of each project. (fer) studio is a young, eager and contemporary design-focused firm. After fifteen years, it continues to grow, taking on more complex challenges. The firm continues to expand its abilities and create unique contemporary structures that will engage interesting dialogue within the larger architectural community.

*Please note, in June 2016, due to unforeseen familial obligations, Douglas Pierson will be moving his family to North Carolina. After years of a successful design collaboration, Mercier and Pierson amicably have ended their partnership. It is important to list all credit to ‘(fer) studio’ while keeping in mind that Christopher Mercier is now sole principal.

http://ferstudio.com/studio/
Posted by Get the Funk Out! at 5:02 PM