ANNABELLE GURWITCH The actress and bestselling author shares a hilarious new collection of essays about family in Wherever You Go, There They Are. Host Janeane Bernstein chats with Annabelle Gurwitch May 1 at 9:30am pst! 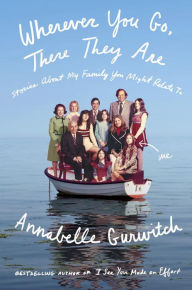 When Annabelle Gurwitch (best recognized as the co-host of TBS’s Dinner & a Movie, among many other roles) was a child, surrounded by a cast of epically dysfunctional relatives, she secretly prayed that it was all a terrible mistake. A family of bootleggers, gamblers, and philanderers, the Gurwitches have always been a bit vague on the standard ideal of a loving and supportive family. Their definition includes people you can count on to borrow money from, hold a grudge against, or blackmail. One day, unfortunately, Gurwitch woke up to realize that she'd made pretty much the same mistakes as everyone else before her--just in a new zip code. Wherever she went, there they were.

Join Annabelle Gurwitch on April 19th as she discusses (in her hilarious way):

· her southern Jewish roots
· her flirtation with surrogate families, including theater folk, pet people, a UFO cult, the sisterhood, and the ladies who brunch at Tel Aviv Gardens Retirement Home in Miami, FL
· that, for better or worse, it's worth celebrating the traditions, rituals, and recipes that come with a shared mythology and legacy (even if her own inheritance amounts to a small plot of land split between five relatives on an ill-fated sliver of sand known as Massacre Island.)
· the spectacularly daunting search for the community where her aging parents will spend the last chapter of their lives.

Both hysterically funny and moving, Gurwitch shares the importance and insanity of family for anyone who's even occasionally been frustrated by the people they share carbohydrate-laden meals with every year.

About the Author
Annabelle Gurwitch is an actress and the author I See You Made an Effort (a New York Times bestseller and Thurber Prize finalist); You Say Tomato, I Say Shut Up (coauthored with Jeff Kahn), and Fired! also a Showtime Comedy Special. Gurwitch gained a loyal following during her stint cohosting Dinner & a Movie on TBS and years as a regular commentator on NPR. She’s written for the New Yorker, the New York Times, The Los Angeles Times, and The Hollywood Reporter. Gurwitch was the new anchor on HBO'sNot Necessarily the News and hosted WA$TED on Planet Green network. Her acting credits include: Seinfeld, Boston Legal, Dexter, Melvin Goes to Dinner. A veteran of many lauded and even more misguided theatrical productions, she regularly performs at arts centers around the country. Annabelle is a Jewish mother, a reluctant atheist, and an ardent environmentalist. She is empty-nesting in Los Angeles. www.annabellegurwitch.com
Posted by Get the Funk Out! at 4:27 PM