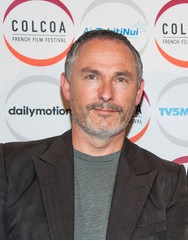 
After completing a Master’s degree in Economics and Politics in Paris (Dauphine University), François Truffart was Cultural Attaché in charge of the promotion of French cinema and television programs at the French Embassy in Hungary (Budapest), Japan (Tokyo) and the United States (Los Angeles) from 1991 to 2001. In 2001, he joined Gilles Jacob and the Cannes Film Festival to become Director of La Cinéfondation. From 2003 to 2004, he was the U.S. representative of the Cannes Film Market. He has been in charge of programming for the COLCOA French Film Festival since 2004 and has been assigned Executive Producer of the event in 2007.


He is the author of Le Guide des Televisions en Europe, published by Bayard Press in 1991.
Francois Truffart was honored by the French governement with the order of Chevalier des Arts et des Lettres during a reception with French Minister of Culture, Mrs Fleur Pellerin, on February 4, 2016.