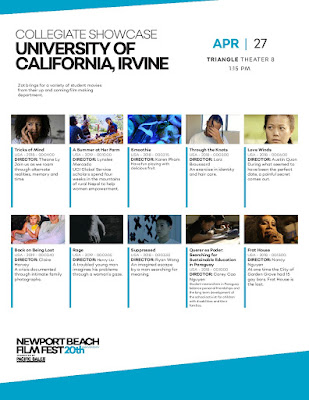 "DigiFilm is the hub for creative film production at UC Irvine Claire Trevor School of the Arts. Our courses challenge students to put critical thinking and technical skill into action. The curriculum is a model of what it means to be a working film artist."

Haircut (2004), written and directed by Jackson and features James Kyson Lee (NBC’s Heroes) won the Jury Prize for Best Experimental Film at New Orleans’ Reel Identity Film Festival, and was named Best Experimental Short at Cinekink New York. The film was shot entirely in first-person with a surveillance camera mounted to the forehead of its protagonist. Haircut has screened as an official selection at 41 international film festivals.

Jackson earned his MFA studying Theater Directing and Experimental Film at the University of California Los Angeles. As a theater director he has staged works by Jean Genet, E.E. Cummings, and Naomi Wallace. Jackson produced video installations for the premiere of Long Beach Opera’s Downtown Opera Project. In 2007, he had his New York gallery premiere at Alexander Gray Associates. In 2006, he co-produced video installations for LACMA Lab’s ‘Consider This…’ with artist Bruce Yonemoto. As a member of ASCAP, his writing credits include lyrics on albums for the Japanese band Scudelia Electro, and are featured on the Sony/NHK-1 anime King of Thieves: Jing.


Jackson has taught acting and directing at UCLA, and video-making at the Southern California Institute of Architecture (SCI-Arc), and the San Francisco Art Institute.
Posted by Get the Funk Out! at 12:39 PM