4/29/19 @9:45am pst - Jack Murgatroyd called in to KUCI 88.9fm to talk about his film with Tim Burnham called Part of Water about veteran life guard Ben Carlson, who lost his life, while attempting an intense rescue. Part of Water will be screened at the closing night of the Newport Beach Film Festival. Listen LIVE on KUCI 88.9fm - stream www.kuci.org 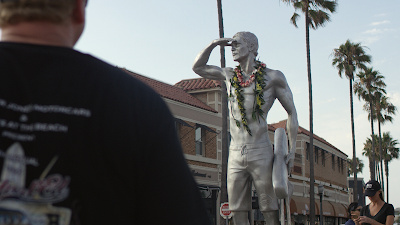 Part of Water is a feature length documentary which will tell the tragic story of Ben Carlson, an American hero who lost his life in the line of duty. Ben was an experienced Newport Beach Lifeguard who unfortunately drowned while making an intense rescue during a massive swell in July 2014. With the news of his passing, shockwaves were sent through the community and truly across the world (gaining worldwide news coverage). Our film tells the story of Ben's life and the stories of lifeguards across the country who put their lives on the line to keep our beaches safe.

When most people think of ocean lifeguards, they think of Baywatch; but that couldn’t be further from the truth. Part of Water tells the tragic story of fallen lifeguard, Ben Carlson, who lost his life in the line of duty while on a rescue during a massive swell in 2014. Through Ben’s story, Part of Water sheds light on the countless dangers that ocean lifeguards face and earning the respect they’ve always deserved.


Part of Water Festival Tickets - https://www.newportharboralumni.org/movie (we can talk more about this during the interview but we're doing 4 showings of the film on May 18th at Newport Harbor High School)


Bio
Jack is an award winning filmmaker based in LA. After graduating the USC School of Cinematic Arts in 2011, he started Hunt House Pictures which focuses on commercial and documentary work. His love of filmmaking initially stems from the surf world and through his work he seeks to explore stories of community and larger than life characters.

Excited for our interview tomorrow! It sounds like Tim will be able to make it. He will supply you with his bio and all that stuff. Let us know if there's anything else you need in the meantime!


Instagram - @partofwater
Posted by Get the Funk Out! at 6:34 PM