"A laugh-out-loud heartwarmer." —O, The Oprah Magazine - Steven Rowley, bestselling author of Lily and the Octopus and The Editor, returns this May with THE GUNCLE, a warm and deeply funny summer read about a once-famous gay sitcom star who, after an unexpected family tragedy, gains custody of his niece and nephew for the summer. 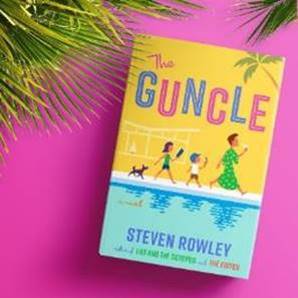 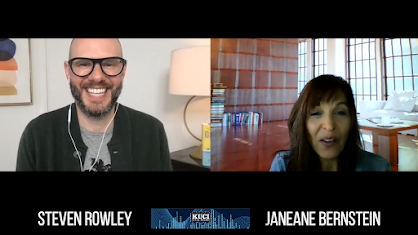 WATCH | LISTEN
Steven Rowley, bestselling author of Lily and the Octopus and The Editor, returns this May with THE GUNCLE, a warm and deeply funny summer read about a once-famous gay sitcom star who, after an unexpected family tragedy, gains custody of his niece and nephew for the summer. It’s a moving tribute to the power of love, patience, and family in even the most trying of times, wrapped up in the humor and heart that have become trademarks of his work, and will be sure to please readers of Rowley’s earlier novels and fans of Andrew Sean Greer, Maria Semple, Grant Ginder, and Matt Haig. THE GUNCLE is a perfect book for summer reading and Pride Month coverage.

Patrick, or Gay Uncle Patrick (GUP, for short), has always loved his niece, Maisie, and nephew, Grant. That is, he loves spending time with them when they come out to Palm Springs for weeklong visits, or when he heads home to Connecticut for the holidays. But in terms of caretaking and relating to two children, no matter how adorable, Patrick is honestly a bit out of his league. So when tragedy strikes and Maisie and Grant lose their mother and Patrick's brother has a health crisis of his own, Patrick finds himself suddenly taking on the role of primary guardian. Despite having a set of "Guncle Rules" ready to go, Patrick has no idea what to expect, having spent years barely holding on after the loss of his great love, a somewhat-stalled career, and a lifestyle not-so-suited to a six- and a nine-year-old. Quickly realizing that parenting—even if temporary—isn't solved with treats and jokes, Patrick's eyes are opened to a new sense of responsibility, and the realization that, sometimes, even being larger than life means you're unfailingly human.

“I’ve had a long fascination with AUNTIE MAME, the 1955 Patrick Dennis novel that was quickly adapted for the stage with Rosalind Russell as Mame, then for film also starring Russell, then as the Broadway musical MAME starring Angela Landsbury, then finally as a ghastly movie musical starring a miscast Lucille Ball. Dennis lived a complicated and often closeted existence which saw him marry and have children while living a double life; later he became very active in the Greenwich Village gay scene before his life was tragically cut short by pancreatic cancer in the mid-1970s. Mame is often described as being inspired by his own aunt Marion Tanner, a characterization that Dennis denied. And maybe she was, in part; writers don’t like to give away all their secrets. But to many, including myself, it seems clear Mame’s outsized personality, exuberance and general joie-de-vivre bloomed from the stifled parts of himself that were dying to break free. In short, Mame, like many of the other fabulous female characters created by closeted male writers of that era, was a stand-in for a gay man.


In the spring of 2018, two things happened. I was by chance rereading the Patrick Dennis novel and my brother and his family, including his two young boys, came to visit me for a week at my home in Palm Springs. I had quite a week planned for them, their first to the area, showcasing the best the Coachella Valley had to offer. Hiking in the hills to see mountain goats, visiting the zoo, taking the rotating, glass tram up to an elevation where there snow still capped the mountains, inflating every pool float in my collection until you could barely see blue from the swimming pool’s surface. But after only a day, my brother, a corporate attorney and partner in his law firm, was called to appear in court in Boston on behalf of his clients. And so he flew back across the country, leaving me with his kids for a weeklong adventure in Palm Springs.
Their dad works long hours, and my nephews were looking forward to a week with him as much as a week with their uncle in his pool. Thank goodness I had their mother to help me navigate their disappointment, but it gave me a small taste of what it took to distract them from dismay, and it involved, in part, conjuring my inner Mame and being amusingly larger than life. By the end of that week I was exhausted, but it was worth it as I had somehow earned an outsized place in my nephews’ imaginations – and I knew what I wanted to write next. THE GUNCLE is a family love story, an uncle, his niece and his nephew leaning on each other in a difficult moment and learning from one another as they navigate their way through. While it tackles the difficult subject of grief, it’s also – as Auntie Mame was – funny as hell.” – Steven Rowley

Steven Rowley is the author of The Editor and the national bestseller Lily and the Octopus, which has been translated into nineteen languages. He has worked as a freelance writer, newspaper columnist, and screenwriter. Originally from Portland, Maine, Rowley is a graduate of Emerson College. He lives in Palm Springs, CA.
Posted by Get the Funk Out! at 5:58 PM